On February 27th, in the Tindouf region of southwest Algeria, the N’Khaila pilot fish-farming project was inaugurated in a Sahrawi refugee camp. It was run by the Triangle Génération Humanitaire association.

Refugees from Western Sahara have been living in camps in southwest Algeria, near Tindouf, since 1975. The association Triangle Génération Humanitaire decided to create a fish farm in a Sahrawi refugee camp. The project was born from an initiative of the World Food Programme (WFP), the food aid agency of the United Nations (UN), with a view to improving local food production and particularly the production of animal proteins. Although this is the first fish farm in the Sahrawi refugee camps in southwest Algeria, it is not the first fish farming project to be carried out in these climatic conditions. Indeed, according to the association Triangle Génération Humanitaire, similar projects had already been carried out in Sudan, Yemen and Algeria.

For this project, which began on January 1st 2018, the association Triangle Génération Humanitaire has built two 40 by 20-metre ponds and four 6-metre long ponds, as well as a technical shed that includes the hatchery. A laboratory dedicated to chemical and physical analyses has been installed in the refugee camp. Its function will be to control pH, temperature, oxygenation and salinity in the ponds. For this first trial, the fish farming pilot project will be based on the breeding of Nile tilapias. This species was chosen by Triangle Génération Humanitaire because of its resistance to the changes in temperature and salinity rates in the water. This species should therefore be resistant to the climate in southwest Algeria, which is the same as that of the Sahara Desert. During the construction of the N’Khaila fish farm, some challenges had to be overcome, such as the remoteness, the low development of the Algerian fish farming sector and the need for scarce technical equipment. 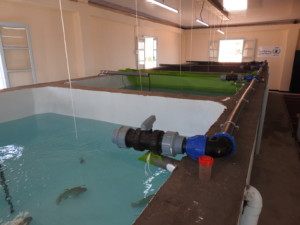 What’s the objective of the project? The fish farm, inaugurated in February, aims to provide an additional food resource for Sahrawi refugees. The association Triangle Génération Humanitaire seeks to improve the Sahrawis’ food security in the camps of southwest Algeria. Eventually, the fish farm should be managed by the refugees themselves. Indeed, the Sahrawi refugees at the camp should go through a learning and familiarisation phase with the fish farming infrastructure. The association estimates the time needed for the refugees to achieve full management of the fish farm to be two or three years. Regarding the future and sustainability of the project, Ahcene Oulmane, head of the fish farming pilot project for Triangle Génération Humanitaire, said: « We plan to hold a roundtable to discuss the opportunities of the project, the reproduction conditions in the camps on an individual or collective scale and the possibility of making the built farm a real aquaculture training center for young Sahrawis. »