Buenos Aires, from Kirchner to Macri, part 2 : The 'before and after' of a Latin American capital

Over a year ago, in December 2015, the current President of Argentina, Mauricio Macri, was replaced by Cristina Kirchner. A transition from left to right, the reopening of the markets… political change that pleases the international players. An analysis of the capital, Buenos Aires.

Previously on this file :

Buenos Aires, from Kirchner to Macri, part 1: The ‘before and after’ of a Latin American Capital

The public sphere is the first witness of Mauricio Macri’s new government. Certain streets are now conveying messages which, once decoded, show the socio-political change.

In the trendy district of Palermo, characterized by gentrification, some street corners are surprising. They are not painted with graffiti by the latest fashionable artist. Homeless people have settled there, on the ground. 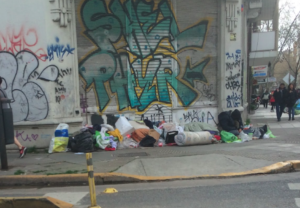 The containers, which serve as neighbourhood bins, are becoming more and more vandalized. A lot of these large green bubbles, once closed by dangling rubber strips, are now wide open.  These holes allow a glimpse into one of poverty’s aspects. Trash often flies through these forced openings. Faces sneak out of the hole for a few moments to get some air before heading back in to sort waste.

This scene’s standardization says a lot about the situation of the Buenos Aires citizens. However, the number of homeless people remains unknown. Macri keeps saying that the number of people sleeping in the street is stable and stagnates at around 800. His government even suggests that it is slightly decreasing. The Médecins du Monde (Doctors of the World) organization states that more than 16 000 people are “surviving” on the streets of the city.

Taking a cab : from being the norm to being an exception

This sidewalk reality is not the only one. After the enforcement of the austerity measures, the starting prices of the taxi meters went up. Taxis are a means of transport that is used a lot. There is, on average, one taxi for every 70 residents in Buenos Aires. But the users are not as numerous now as they were a few years ago. In 2011, the 595/11 decree fixed the starting price of one journey to 7.30 pesos. An increase that is already considerable because it was more than 40% higher when compared to the year before. Now, in 2017, the porteños are almost nostalgic for that price. Today, the taxi meter starts at 20 pesos in the day and 22 at nightime.

This is not the only change. The drivers are also getting younger and younger. Some of them are equipping themselves with a plexiglass window to separate themselves from the passenger. “It is a security measure that is enforced because of the violence and theft in the taxis”, says Diego*, a driver. 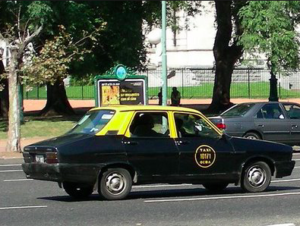 The porteña metamorphosis since Macri

The face of Buenos Aires has changed. Foreign investments are increasing, but the price to pay for the citizens is considerable. Today, these political decisions have visible consequences for civil society. In Buenos Aires, the blind trust towards government policy is broken and a certain nostalgia can be felt.

*The names have been modified