Buenos Aires, from Kirchner to Macri, part 1 : The ‘before and after’ of a Latin American capital

Over a year ago, in December 2015, the current president of Argentina, Mauricio Macri, replaced by Cristina Kirchner. A transition from left to right, the reopening of the markets… a political change that pleases the international players An analysis taken from the capital, Buenos Aires. 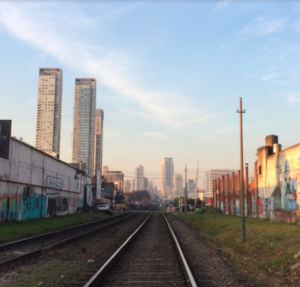 At the end of 2015, 51.34% of Argentinian voters chose to hand the keys of the Casa Rosada back to Macri, a former entrepreneur who advocates for liberalism and for Argentina to make a comeback on the global marketplace. His politics are of centre-right tendencies. It is the first non-left government since the era of Juan Domingo Peròn (from 1946 to 1955 and 1973 to 1974), except for a brief period from 1999 to 2001.

As Macri’s party’s name Cambiemos [“Let’s Change”, ndlr] foreshadows, ever since the arrival of the new President, there has been a lot of change. Change is what drove the centre-right candidate’s campaign, and what his presidency revolves around. “Austerity” and “recession” are some of the headlines that we read in the international press. However, the words that cover the city’s walls are “inflation” and “wage”. 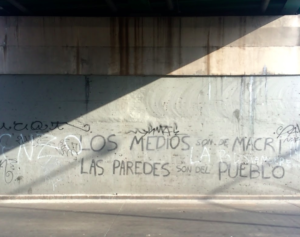 « The media belongs to Macri, the walls to the people ». Credits to Tiziana Bombassei Frascani de Vettor.

When talking about austerity, Argentina is a great example for the macroeconomists. Calculating the inflation is simple and transparent, which was not the case during the Kirchner’s term in office. They had refused to disclose the inflation figures to the International Monetary Fund (IMF).

However, Argentina is losing some of its sparkle and the consequences are onerous. On one hand, calculating the inflation is simple, but on the other, adjusting to the price increase is more complicated. Whilst the rates inflated to 43%, the porteños wage has only gone up to 20%. A lot of them are, against all expectations, forced to tighten their belts in order to make ends meet. 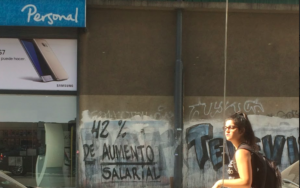 Cutting the subsidies : an ecological awareness at a social cost

The porteños used to receive energy subsidies on water, electricity and gas from the Kirchner government. But ever since Macri arrived, the subsidies have been taken away. Energy prices have gone up by 700%. In practical terms, a household that consumed 202 kWh a month would witness their bill increase from 26 to 158 pesos. The country was used to being able to wash the sidewalks with drinking water, and even the most precarious neighbourhoods had access to drinking water. Today, the situation has changed.

Environmentalism, which has been put aside for the last ten years, is once again becoming a priority for the authorities. At the same time as rising energy bills, the government has set up an incentive strategy for energy savings. The users will now be able to reduce their electricity bills depending on their energy savings. Following that example, if the household reduces its electrical consumption by 10% compared to the year before, they will only have to pay 128 pesos per month next year, instead of 158.

The subsidies have also affected other areas. 9.5% of the population supposedly lives in the villas, precarious neighbourhoods that can be compared to the Brazilian favelas. Under the Kirchner government, cafeterias would serve a hot meal to the children every day. Their kitchens now only provide 5 meals a week. “The food sometimes arrives on the day of the expiration date”, says Maria*, a young girl who tutors children at the villa’s cafeteria.

Another major change concerns the monetary policy and the abolishment of the parallel dollar. Under Cristina Kirchner’s term, nearly 15 types of dollars existed. The main ones were the official dollar [which followed the exchange rate fixated by the National Bank, ndlr], the blue dollar [sold and bought at the black market with more attractive rates than the official dollar] and the soy dollar [restricted to the soy industry]. There was also the liquidity dollar, the card dollar, the corn dollar, the meat dollar, etc. The only thing it did was accelerate the inflation.

*The names have been changed.