Çiğköftem, sustainable fast food, in spite of the stereotype.

What if the decline in meat consumption is actually because of fast-food chains? Looking at Çiğköftem, a Turkish vegan chain created in 1993, this could be the case. Today it is one of the most important fast food chains in Turkey and it is slowly spreading throughout Europe. Report.

In the streets of Istanbul, Çiğköftem restaurants are as numerous as McDonald’s. On the menu, many meals are made from cig köfte – bulgur balls – and raw vegetables. Cig köfte is a traditional Turkish dish in which raw meat is added to bulgur. But here, a ‘vegan’ sticker is in the window. While rolling a dürüm – a sort of cake – the cook explains: ‘at home, I always cook it with meat but because it is raw meat, we can’t sell it as fast food’. Hygiene measure. 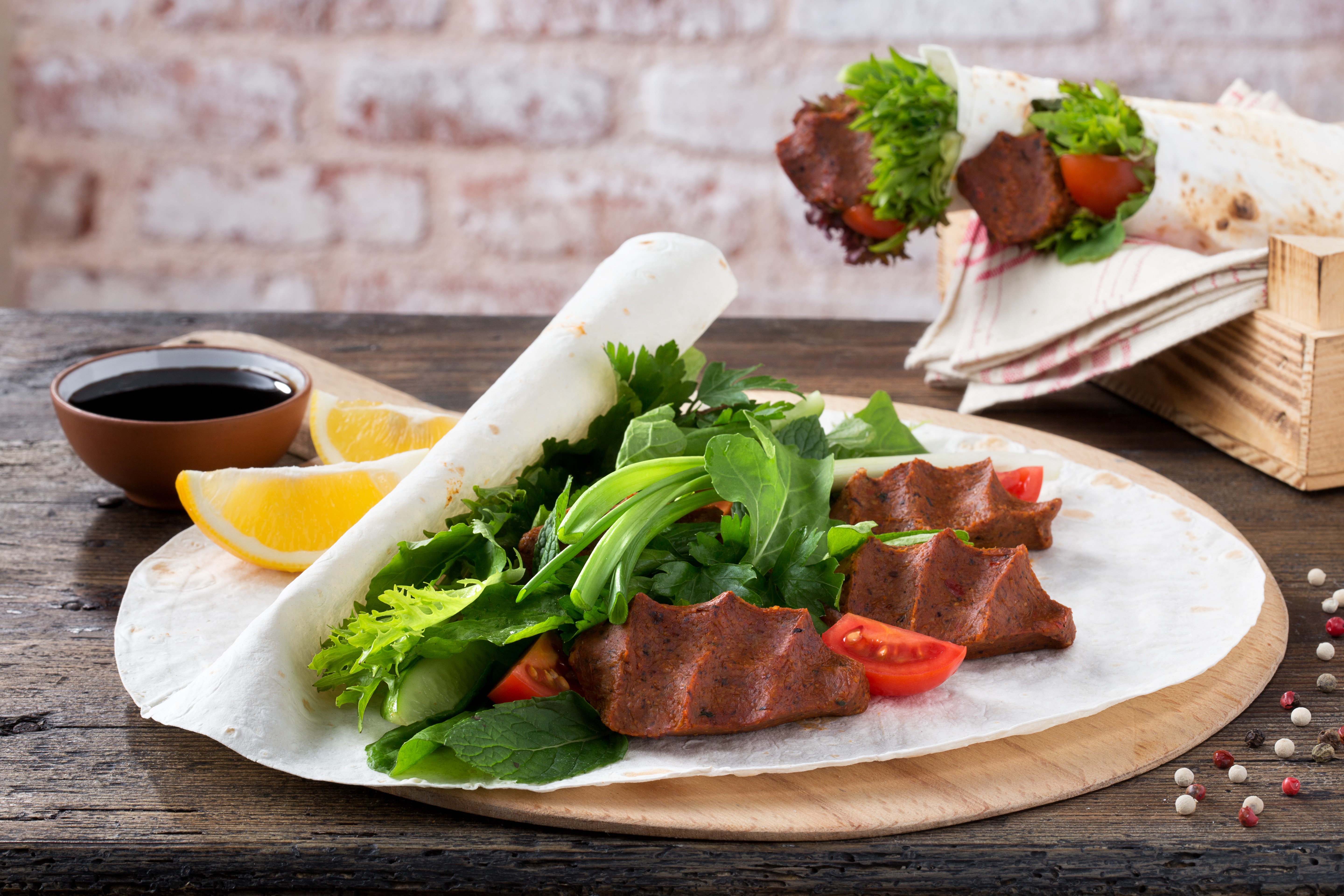 ‘Vegan without falling into the cliché of a seed-eater’

Hippolyte is vegetarian and eats regularly at Çiğköftem. ‘What I like about Çiğköftem, is the idea that I can eat vegan food without falling into the cliché of being a seed-eater. We can eat better and cheaper than in other fast food restaurants’. For him, the number one priority is the reduction of meat consumption. Without a radical change, ‘we will never be able to provide food for the 9 billion human beings expected by 2050’.

It is true that numbers surrounding livestock production are frightening. According to consoglobe.com, one kilogram of bovine meat requires between 30 000 and 60 000 litres of water. The FAO highlights that livestock production generates more greenhouse gas emissions than the transport sector. If this number is looked at in context, with animal and meat transportation included in the calculations, other studies have found the number to be underestimated. Greenpeace is trying to raise the alarm: according to the NGO, bovine cattle alone is responsible for 80% of Amazon rainforest deforestation.

Çiğköftem however, is far from winning its ecological and ethical ‘battles’. The brand seems to be overdoing its vegan image. Apart from the biodegradable packaging, the food is neither organic nor local, far from the ideal of some vegans, who chose this way of life to reduce their ecological impact. There is no ‘fair trade’ label either.

Hyppolyte is realistic on the limits of the green-washing effort made by Çiğköftem. ‘Veganism is not perfect. Being vegan is the absolute non-consumption of products of animal origin. However, in the stricter sense, a vegetable that is treated with pesticides is still considered vegan. Another example: palm oil, for which we destroy the primary forests in Indonesia and Malaysia. It is a vegetable oil, therefore, technically vegan. Veganism shouldn’t be replaced by local products, but complete it. For me, eating at Çiğköftem, is not “ethical” consumption’.

He admits that it ‘is still very complicated to eat vegan food out of the house’, but he is staying optimistic. ‘Opening more Çiğköftem would be an opportunity to make vegan food more accessible, and change the behaviour of consumers. The ecological impact of a meal at Çiğköftem is still vastly inferior to one at Burger King for example”. If the fast food chain is not revolutionary, it stills gives hope of a progressive transition of the system from the inside. It could help less ‘radical’ eaters to take action, as they are the ones who, although they are aware of the impact of their meat consumption, are not ready to change their lifestyle to reduce it.

A window to a new trend in eating

In this spirit of awareness, Hippolyte thought about being a stakeholder in the firm. ‘The vision I defend is a world where beside each McDonald’s, stands a Çiğköftem’. The only problem: Çiğköftem is not on the stock exchange. If he seems critical of McDonald’s, it is because the brand is the symbol of meat over-consumption. Every day, it serves 69 million clients, almost 1% of the world’s population. ‘This is clearly not sustainable, he warns. We can’t forbid people to eat in fast food chains, so it is important to propose alternative solutions that are less harmful to the planet.’

Since 1993, Çiğköftem has established itself in many European countries. It has even opened new headquarters in Germany, in addition to the ones in Istanbul. Veganism has become a business like any other. Çiğköftem is contributing to the awareness of this style of eating, even if it comes after financial gain.