Move most slowly if move you must: how Slow Art Day comes to Hong Kong with exhibition of trailblazing local artist Hon Chi-fun

Many words might be used to describe Hong Kong. The word “slow”, however, tends not to roll off the tongue — after all, this is the place where a trifling railway delay is enough to incite citywide vitriol. With that in mind, how is Slow Art Day like in Hong Kong?

The worldwide Slow Art Day initiative was born as a response to the hecticness of experiencing art. According to a 2017 study published in the Psychology of Aesthetics, Creativity, and the Arts, the average person spends a measly 28.6 seconds viewing artwork — factoring in the time spent reading the label and taking selfies. Bombarded incessantly by information, spoilt-for-choice museum-goers are often propelled further along exhibitions as if on an assembly line. But further isn’t always deeper. Hence, Slow Art Day invites the public to pause the jostling for a moment and connect with art — slowly.

The average person spends a measly 28.6 seconds viewing artwork — factoring in the time spent reading the label and taking selfies.

This year, the Asia Society Hong Kong Center also took part with a tour focused on A Story of Light, their exhibition on pioneering local artist Hon Chi-fun (1922-2019). Arbored in a niche, the Center, with its meandering pathways and subdued pavilions, was evocative of Yeats: “Move most slowly if move you must / in this quiet place”. In the quietude of the Center’s gallery, several pieces in the exhibition were highlighted for museum-goers to slowly contemplate for ten minutes each.

Hon Chi-fun was one of the city’s pioneering visual artists, celebrated for his evocative abstract paintings and silkscreen prints that melded East and West in circle motifs. While working for the Hong Kong Post as a postal inspector in 1954, Hon began his self-taught forage into the art scene. In 1963, Hon joined the Modern Literature and Art Association, and in the following year, co-founded local avant-garde collective the Circle Art Group. In 2017, he received a Medal of Honor from the Hong Kong Special Administrative Region (HKSAR) Government for his artistic achievements. The self-proclaimed civil servant slash hippy-with-a-motorbike has made international waves throughout his decades of artistic creation, whether with his bold, abstract brushwork from the 60s, or with his more recent poetic landscapes. Hon once said that painting demands “being in sync with the times and being of one’s own” — and despite the metamorphoses it has undergone across the eras, Hon’s work maintains a luminescent essence of its very own. 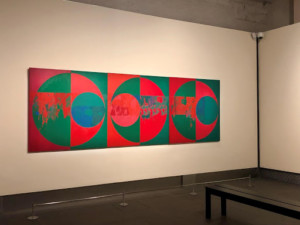 The first piece introduced was the Bath of Fire (1968). A bold, radical triptych, Bath of Fire was born from the irreverent and experimental cradle of the late 60s. The prints of foreign models and the Warholesque use of silkscreen are juxtaposed against a hypnotically recurring Taoist circle motif, making the piece a visual representation of Hong Kong’s melting pot of cultures. This fusion of energies is again seen in the work’s experimental combination of Polaroid photography and silkscreen printing techniques.
Bath of Fire is also intensely personal, with its creation deemed by Hon to be “a rebirth”. Along with unsent letters and poems from Hon’s past, a self-portrait is snuck in. The artist gazes out from the triptych, a young maverick in the furor of a shifting world. 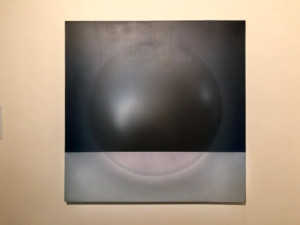 The second piece floats serenely in a celestial chasm. Hon’s Floating Weight (1976) was painted layer by layer with an airbrush, inspired by the urban graffiti culture of 1970s New York.
Seemingly condensed from light, the orb is inscribed with luminous text pages from second-hand Buddhist sutras. Intriguingly, Hon had reported a mixture of feelings in the creation of Floating Weight: guilt at destroying sacred texts, and pleasure at giving them a new life. 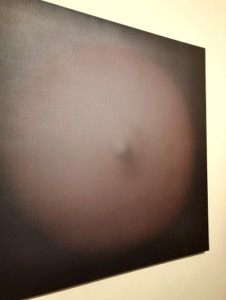 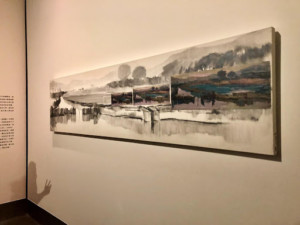 Hon Chi-fun, A Place That Was, 1998, acrylic and collage on canvas. Collection of Hong Kong Museum of Art.

Depicting the Jie River in Gansu Province, an idyllic view that Hon had repeatedly visited during the mid-70s, A Place That Was (1998) reflects Hon’s sadness over his inability to return to the Mainland after the increase in political tensions in China from the 80s onwards.

The black and white backdrop and the slowly diminishing laser-print collages depict the same scene across time – the former in the present, and the latter in the past. Behind the final collage, an empty white box is left: it might be suggestive of a frame, if one considers the series of overlaid landscapes to be a gallery of sorts; but it might also suggest the endlessness of memory. A bit more tangentially, the temporalities in this piece reminds one of Monet’s Haystacks series. But while Monet’s Haystacks capture moments, Hon’s perspectives echo among each other in infinite layers.
A Place That Was alludes to Chinese tradition not only in its calligraphic brushstrokes and nature imagery, but also in its horizontal form, evocative of traditional landscape scrolls that also unfold time.

The tour was slow, engrossing, and intimate. The stillness of the observation, coupled with the entrancing luminescence of Hon’s work, seemed to have had removed the exhibition from worldly time.
When asked about the difference between this Slow Art Day Tour and the run-of-the-mill ones, the docent replied, “Here I’m limited in the works I can talk about. When there’re more works, you can craft a narrative in how the works speak to each other, after seeing the exhibition a few times… But here, being limited to four works creates a nice pace.” An immersive connection, as explained by Slow Art Day founder Phil Terry to the Art Newspaper, “can be transformative and go much, much deeper than a quick look”. On Slow Art Day, instead of asking how works converse with each other, perhaps we can turn to ask ourselves: how does each work converse to us?

On Slow Art Day, instead of asking how works converse with each other, perhaps we can turn to ask ourselves: how does each work converse to us?

Once again, Yeats comes to mind unbidden: “Like a long-legged fly upon the stream / his mind moves upon silence”. Let the city’s footfalls still for a day – what’s the hurry?