The Republic of Artsakh’s pursuit for international recognition

TRANSLATED BY JOYCE CHEN AND PROOFREAD BY LUCY HARRIES

On 13 February this year, the self-proclaimed Republic of Artsakh, or ‘Nagorno-Karabakh’, celebrated 30 years of a liberation movement for their territory, which has an area of 11,430 square kilometres and 150,000 inhabitants. This territory borders Armenia and de facto belongs to the nation, but de jure is part of Azerbaijan. Artsakh is still at war with the Azeri state, who launched an attack in 2016, causing over 100 deaths. With a population that is 95% Armenian, Artsakh meets all of the criteria of a state; it has a president, a government, a parliament, and a population that identifies themselves with the territory where they live. What Artsakh is missing is international recognition. Whilst, up until now, no member state in the United Nations has recognised Nagorno-Karabakh, some cities, regions, and eight American states, such as California and, more recently, Michigan, have taken the first step. Le Journal International made a trip to Stepanakert, the capital of Artsakh.

Although not internationally recognised, this region has nevertheless played an important role in contemporary history. The Armenian leaders of Nagorno-Karabakh sought greater political freedom, made possible through Mikhail Gorbachev’s ‘glasnost’ policy, thus creating a true opposition movement. Thereafter, Armenia and Azerbaijan declared independence in 1991 and the small enclave’s parliament followed suit. Baku hence sent military convoys to repress any inclinations for independence that Armenians may have in Nagorno-Karabakh, causing outrage to this day. 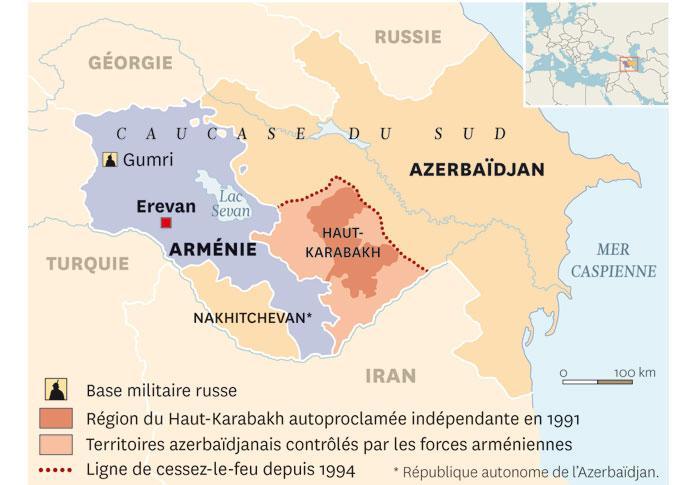 A century of conflict

Nagorno-Karabakh’s first declaration of independence dates back to 18 July 1918, when the global geopolitical context was shaken by the First World War. The Caucasus was not captured. While the Ottoman Empire was collapsing in Africa and the Balkans, the Turks were seeking to increase their influence in the East, where the Turkish populations of Dagestan, Turkestan, and Azerbaijan had settled. Nevertheless, Armenia’s presence prevented the Turks from creating a fixed territory. By claiming Van – historically Armenian – Armenia blocked the Turks’ route to Persia. In claiming authority over Nakhchivan and Zangezur, they obstructed the route towards the Kura Valley and the Turks’ access to Baku.

The Treaty of Batum, signed on 4 June 1918 by the Ottoman Empire and Armenia, is considered by the Armenians to be a true ‘diktat’ because it drew new borders that took away 11,000 square kilometers of highlands. The declaration of independence made by the Armenians of Nagorno-Karabakh a month and a half later, on 18 July 1918, could have been considered as a response towards this ‘injustice’.

Nevertheless, the Armistice of Mudros, signed by the Ottoman Empire and its allies in October 1918, handed over Nagorno-Karabakh to Azerbaijan. From then on, the Azeris tried to annex it with the help of the British. The latter’s interest was to completely take over Baku’s oil exportations and hence to prevent the Bolsheviks from having access to it. At the Paris Peace Conference in 1919, the British leaders did everything in their power to give Nagorno-Karabakh over to Azerbaijan.

War broke out between Armenia and Azerbaijan over Nagorno-Karabakh throughout March and April 1920. Joseph Stalin gave two regions with Armenian populations to Azerbaijan: Nakhchivan and Karabakh, whose borders were drawn randomly. Gevorg Melikyan, a member of the Armenian Institute of International and Security Affairs, sums up the situation as follows: “if we focus on the historical context, Nagorno-Karabakh has never been Azeri”.

In 1988, the first territorial claims on Nagorno-Karabakh were made, followed by conflict between  Azerbaijan and Armenia. It was only six years into this conflict that the latter came out as the winner. Meanwhile, Nagorno-Karabakh had unilaterally declared independence in 1991 after a referendum which resulted in 96% of votes saying ‘yes’ to independence.

One year later, with the goal of facilitating dialogue between Armenians and Azeris in mind, the Minsk group was created, co-chaired by the United States, France and Russia. The latter played a more than ambiguous role in its relationships with the two parties. While selling arms to both parties, Russia also has a military base set up in Gyumri, Armenia. Russia thus maintains a relationship that allows it to keep its influence in the region.

The Organisation of Security and Co-operation in Europe (OSCE)’s Minsk group is given the responsibility of finding an internationally accepted solution to resolve this conflict. Its solution is embodied by the ‘Madrid principles’, of which there are six in total, which recommend: the return of occupied territories surrounding Nagorno-Karabakh; an interim status for Nagorno-Karabakh guaranteeing security and self-governance; a corridor linking Karabakh to Armenia (Kalbajar and Lachin); the final status of Nagorno-Karabakh to be determined in the future through a legally binding expression of will (which consists of the local population taking part in a referendum); the right for internally displaced people and refugees to return to their former places of residence; and international security guarantees which would include a peacekeeping operation. 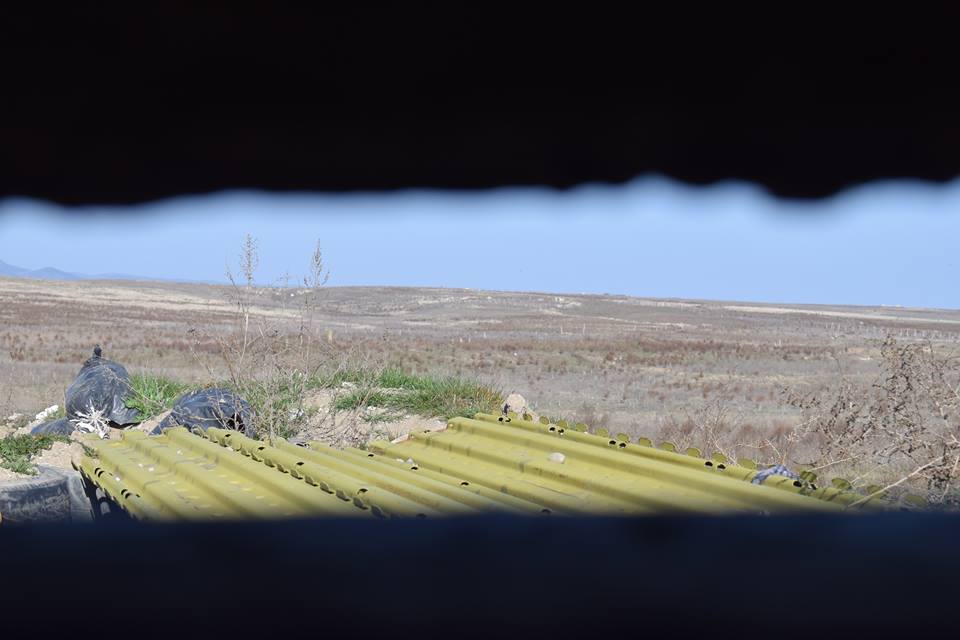 The “four-day war” in April 2016 resulted in 75 deaths and close to 200 injured, also destroying villages. This was the deadliest war since the ceasefire in 1994 between Erevan, Stepanakert and Baku, where 30,000 died and thousands were displaced, and serves as a reminder of the heated tensions between the two sides, as well as highlighting how ineffective, perhaps even obsolete, the Minsk group is. Despite all of this, Artsakh’s Minister of Foreign Affairs, Masis Mayilyan, said that he was, “open to dialogue with Azerbaijan” but “regrets that Baku incessantly blocks the procedures of negotiation”. Mr Mayilyan also stressed the “necessity of international recognition”.

According to existing public international law and, in particular, the Montevideo convention of 26 December 1993, the definition of a state depends on three inseparable criteria: a permanent population, a government with the capacity to enter into formal relations ‘with other similar entities’, and a defined and recognised territory. Artsakh meets (almost) all of these criteria: a president, Bako Sahakian, a government, a parliament, a population (95% Armenian) which identifies itself with the territory it lives in, with Stepanakert as the capital. Social policies were put in place by the state to increase the region’s population size. “If a family has two children, the state builds a house for them. For four children, the family receives over $2000. Finally, for six children or more, the family would receive a car”, a member of the government explains.

The only thing Arthsakh is missing is international recognition. In this area, the small Republic is making progress. It may not yet have been recognised by any Member State of the United Nations, but it has formed groups and circles of friendship with French and Belgian cities. This decentralised form of cooperation equally applies on a larger scale; for example, eight American states, including California and, most recently, Michigan, have recognised Artsakh. Masis Mayilyan confirms that “[its] policy consists of creating links with cities and states”, adding that he was “open to the world, and ready to cooperate with the EU”. In response to the question of whether a State would dare take the step in recognising them, he answered that “it was highly likely in the near future”.

Mr Melikyan states that it is surprising to see Azerbaijan hang on to a mountainous, landlocked region where “zero Azeris live” at all costs. Artsakh has some arable land, water resources and, more importantly, “potential resources in gold, gas, and oil”, according to Aleksey Vesyoliv, a journalist at Eunetwork. She adds that “at the moment, Nagorno-Karabakh doesn’t know how to take advantage of these resources”.

On a larger scale, any conflict in Nagorno-Karabakh could affect the transportation of gas and oil, which travels from the Caspian sea to Turkey. According to Theodoras Tsakiris, professor of Economics and Geopolitics at the University of Cyprus, “these pipelines are of critical significance primarily for Azerbaijan, then Turkey and, to a lesser extent, Europe and the global economy”. The reluctance to recognise Artsakh can also be considered from this point of view; we should not provoke a partner, Azerbaijan, whose oil imports towards the EU quadrupled between 2005 and 2015 partly, but not only, because of sanctions against Russia.

What is even more surprising is the fact that Nagorno-Karabakh has been recognised by Armenia. According to Isabelle Abgaryan, a member of the Armenian NGO Us and Our Country, “the reason why Armenia recognised Artsakh wasn’t to avoid being seen as an aggressor against Azerbaijan. On the contrary, it wouldn’t hesitate to do so if Baku violates the Minsk agreements once again”.

This closeness between the two parties was further seen in the celebration of the 30th anniversary of Nagorno-Karabakh’s liberation movement. The crowd was chanting “Miasin” – reunited [with Armenia]. President Bako Sahakian repeated that “Artsakh cannot imagine any development without Armenia”.

Armenia will remain an important ally so long as the conflict between Erevan and Baku lasts, with neither a short-term political nor military solution. As Raymond Aaron put it, “peace is impossible, war is improbable”. This sentiment is apparent in recent declarations made by the Azeri President, Ilam Aliyev, who declared not long ago that “the war cannot be ended on our side”. Mr Baku’s response to this during a speech for the celebration of the movement’s 30th anniversary was that “Artsakh is ready for peace, but also for war”.