Translated by Célia Courteix and edited by Lauren Valentine

Opium is a drug absorbed in many forms that wreaks havoc on the human body. In some countries, such as Mexico or Afghanistan, this drug helps the poor population that cultivates it to survive. However, the economic dependency and corruption those countries are facing prevent them from fighting efficiently against this drug.

Opium is latex which comes from the Opium poppy. The harvesting techniques are done through small incisions on the poppy flower bulb that cause it to leak. The opium gum that flows out is collected. The milk white gum is then turned into a brown resin. Opium is known for being one of the drugs taken by well-known authors such as Charles Baudelaire. 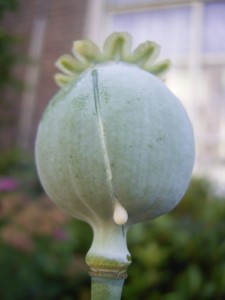 States of euphoria, drowsiness but also a hypnotic and a dreamlike effect are provoked by a huge concentration of alkaloid contained in opium. When taken in strong doses this opioid can make people hallucinate. Therefore, it is both a narcotic drug since it provokes a state of drowsiness and a psychotropic drug as it affects the nervous system.

Thanks to its multiple forms, opium is also used as a medicinal substance in some painkillers. However, poppy sap is also contained into other drugs such as morphine, heroin and codeine.

Opium is thought to come from Mesopotamia. It seems to date back to antiquity, and more precisely back to Sumerian times (3000 B.C.). During the Middle Ages, Arabic and Persian doctors would use it as a painkiller. It was then introduced in Asia, more precisely in South-East Asia.

Poppies have had a major impact on the world for many centuries. Wars were fought over it between China and the British Empire in the middle of the 19th century.

Opium can be taken in different ways. It is taken orally, dissolved in alcohol but mostly smoked with a pipe or in joints. The first effects arrive soon after being consumed – from 3 to 6 hours depending on the way it was taken. An overdose can occur with the first consumption.

Its Effects on Health

The consumption of the poppy flower wreaks havoc on the human body.
The consumption of this opiate first leads to a strong addiction. In the hours shortly after consumption, the user begins to have watery eyes, nausea, runny nose, cramps, diarrhoea, pain, sweating, and shivering, a feeling of faintness and anxiety with severe insomnia.

Infections, intestinal problems, thinness, menstrual cycle and libido disorders can also happen.
Women who take this drug during pregnancy risk their unborn child becoming dependent and requiring weaning. It can also lead to miscarriages and premature births.
The socio-professional impact of its consumption is not to be underestimated either.

Weaning usually lasts a week and is very painful and intense. Nonetheless, it does not represent a life-threatening risk.
In order to tackle addiction and help weaning, a prescription medication – buprenorphine Subutex® – was created in 1994. Thus, preventing a relapse and the withdrawal from the weaning process. 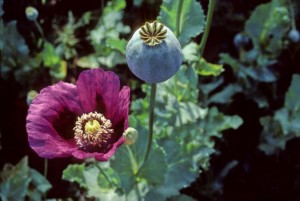 (A poppy flower and bulb)

If you are dealing with problems related to drugs such as opium, detox centres can help. Also, do not hesitate to call the different telephone services in your country to ask for help, such as Talk to Frank in the UK (0300 123 6600).

Nowadays, many countries such as Mexico, Iran, Afghanistan, Burma and Laos are devastated by opium. In some countries, in Mexico for instance, people are killed, tortured or kidnapped for this flower.

The geographic location shows that the drug trafficking hub is located in the “Golden Triangle” – Central and South-East Asia. Located on the borders of Burma, Laos and Thailand, it is the 2nd largest poppy producing area in the world.

In some villages in Burma, 90% of its inhabitants both cultivate and consume the poppy. In 2009, the militia was asked by the State of Burma to deal with the rebels. In exchange, it was able to develop large businesses, notably poppy cultivation. The rebels try to fight against the outburst and circulation of this drug.

Mexico: Cartels and a Flower

In 2018, Mexico was the 3rd largest poppy producer in the world. In this country, many villages illegally produce opium. Poppy flowers first originated in the 1980s. The majority of production happens in the Guerrero mountains; 98% of villages have started to produce it since marijuana crop failed to bring enough money.

When children are about to turn 10, they start to work on the poppy crops. Farmers harvest this drug to sell it to cartels in order to live. They report having to cultivate poppies due to a lack of money. Corn or other crops are not economically sufficient in order to feed their families properly. 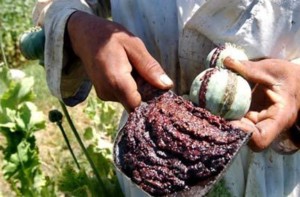 The cartels control the sale and transport of this drug. They even kill each other to get the exclusive rights to the flower. Farmers are often victims of the cartels to whom they do not sell their poppy crop.
A dozen bulbs need to be harvested to make about 1 gram of opium. Poppy crops help farmers to gain from €800 to €1,000 per year.

In Mexico, one kilogram of opium yields about €1,500. When it is processed into heroine and transported to the United States, the price skyrockets. In the United States, poppy exports would be as profitable as oil exports.
Farmers must also face the Mexican army and its government which decided to fight against opium trafficking. To do so, the Mexican army carries out many raids, thanks to satellite tracking, to destroy the poppy fields.

Afghanistan and its poisoned flower

Opium is known as the “Afghan poison”. Millions of Afghan live off the poppy flower. Former Taliban found a new used for this opiate. When they were in power, they would harvest poppy crops to sell opium to Europe, especially to Great Britain but also to the United States. Opium affects the whole population, its different social classes and generations. 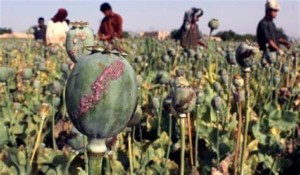 The Afghan police is majorly corrupt. In exchange for money, the police let the farmers correctly harvest their crops. This black gold represents almost half of the country’s wealth. Both Afghan and Mexican farmers cannot live without the money earned from the crops.

Kabul is also impacted by this drug. Between 200,000 and 300,000 inhabitants of the capital are thought to take opium.
Women are not spared by this drug either. During the war, a lot of advice was given, including the use of opium to improve sleep. Children also suffered from this drug. They have to undertake a weaning process due to their mothers taking opium when pregnant or breastfeeding. Parents also give them opium to make them sleep or calm them down.

The 2012 drug market in Kabul stood behind the Grand Mosque. Between 3 to 4 people go to the Afghan capital about every 3 months to smuggle opium. They bring between 10 to 30 kilograms. Then, intermediaries buy a few kilos to resell them in smaller quantities to small “dealers”. Afterwards, they sell opium to the population and to drug addicts. In Afghanistan, opium is more than 100 times cheaper than in European countries. Afghan traffickers transport the drugs across the borders throughout the desert and hide them in the sand.

The failure of the International Fight against Illegal Opium Trafficking

International programmes meant to tackle opium crop are ineffective due to their unsuitability. The inhabitants of those countries live off poppy flowers. Cultivating this flower is far easier than others such as corn and brings in more money.
The international ban on growing these flowers has led to state repression and corruption. Despite the international community’s investment in the fight against opium, the various producing countries are still living off this narco-economy.

Furthermore, methadone, which is used to facilitate weaning, remains as difficult to access or even non-existent in some regions.