Adolf Hitler’s autobiographical work Mein Kampf entered the public domain in 2016, and copyright laws allow its free reproduction in most countries around the world. In France, the publishing house Favard has scheduled a meeting on the topic for 2018.

With over 12 million copies published in Hitler’s time, Mein Kampf continued to be widely read long after its author’s suicide and the collapse of the Third Reich. It became an object of morbid curiosity, fascination, and horror until the end of the 1980s; a bible for dictators, and bedside reading for the budding terrorist. Later, readers accessed the book via publishers who surreptitiously peddled their stocks, or, over the internet, at the click of a mouse. 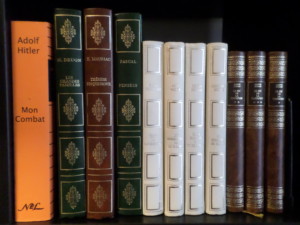 Mein Kampf was banned from publication in France by Hitler himself, who harboured an undying hatred for Germany’s neighbour. However, the publishing house Les Nouvelles Editions Latines published a complete French translation in 1934. The company’s director was taken to a tribunal, and the circulation of the book was outlawed. However, under-the-counter sales of Mein Kampf continued. In 1938, readers were allowed access to another French edition published by Favard, but this was a reduced and truncated version, which portrayed Hitler as a force for peace in Europe.

The post-war period was a time of great polemics between raising awareness of the issues of the memory, and increasing anti-Semitic acts, such as the desecration of Holocaust memorials. Mein Kampf featured on the shelves of many bookstores, including illegal, recently-produced copies. The League Against Antisemitism (LICA) filed lawsuits against Les Nouvelles Editions Latines and the bookstores concerned, which were punished with fines imposed by the Tribunal de Grande Instance of Paris, and Mein Kampf was taken off the shelves. However, considering the extraordinary nature of the material, the Tribunal chose to make an exception. They decided to unban the sale of Mein Kampf, with the caveat that the first page include the text from the law of 1972 concerning the fight against racism, the judgement of the case, and extracts from the Nuremberg trials.

Should Mein Kampf be republished?

For many advocates of the publication and republication of Mein Kampf, the issue is pedagogical in nature. Mein Kampf primarily serves as an educational and memorial text for the public. Readers should be duly warned about the book’s content, with the aim of demystifying the text by reframing it its 1930s context. For those who oppose the publication, this edition represents a historical regression, which contributes to the renaissance of racial hatred and aggravates xenophobia. Some even see it as an insult to those who suffered under Hitler’s ideology, whether directly or through family. Many historians argue that the appeal of Mein Kampf stems from the satisfaction of owning “the object of evil”. If Hitler’s book has been a commercial success in Germany (85,000 copies were sold last year), reading it is a deeply long and unpalatable process. 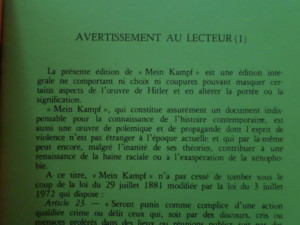 Until 2015, only one legal edition of Mein Kampf was published by Nouvelles Editions Latines. The opening words are “Warning to the Reader”, which features eight pages of judicial and historic references to the persecution of minorities under the Third Reich. Since the book was made open to the public, publishers are no longer obliged to keep this introduction.

Les Editions Fayard: A meeting in 2018

In France, Les Editions Fayard took the gamble of publishing a newly-translated version to compensate for the mistakes of 1934. This edition includes a critical commentary from various scientists and historians. The project had been in development for several years, and was officially announced in 2016. However, the resulting backlash has led the publisher – accused of commercial opportunism – to repeatedly push back the publication date. Politicians such as Jean-Luc Mélenchon have opened up the debate, which was previously confined to the academic sphere. The leader of La France Insoumise even published an article titled “No Mein Kampf when we already have Le Pen!” in the height of the electoral campaign.

A new meeting is scheduled for 2018. Despite our efforts to make contact, we have received no reply from Les Editions Fayard to our questions and interview requests.

A success outside of Europe

Countries with nationalist or supremacist elements draw inspiration from the book and adapt it to the local enemy, such as in India or Turkey, the latter of which has the highest readership figures for Mein Kampf in the world. It sometimes even serves as a manual for management or personal psychology, particularly in North American schools. In Japan, Mein Kampf has been published as a manga and as a comic strip; the Neo-Nazi publications seduce young people disillusioned with current society. The book is a best-seller, the centrepiece of an extremist “kit”, a school manual; Hitler’s influence is not limited to Europe.

What to make of Mein Kampf?

Mein Kampf could appear as a catalyst; a response to widespread feelings of hatred. In 2015, with Europe facing the migrant crisis, some internet users left comments on the website of the British newspaper the Daily Mail using extracts from Mein Kampf, but with the word “Jew” replaced with “migrant”, underlining the extent of the normalisation of hate.

The question remains of what to do with Mein Kampf, and the other of anti-Semitic, hatemongering books. In the internet age, censoring the text would be futile. A campaign of education could prove a more appropriate tactic. Allowing the free circulation of these texts online, without contextualisation, could ultimately be worse than the “explained” version. One beneficial approach could be allowing the sale of Mein Kampf, but under the condition that profits are returned to organisations for promoting awareness and prevention of hatred. An alternative solution could be to redefine the text as a purely scientific artefact, with online access severely restricted, and no paper version published. In 2013, Licra (The International League against Racism and Anti-Semitism) successfully campaigned for five books edited by Alain Soral to be banned for anti-Semitic content. These included L’Anthologie des propos contre les Juifs, le judaïsme, et le sionisme by Paul-Eric Blanrue, La France Juive by Edouard Drumont, Salut par les Juifs by Léon Bloy, The International Jew by Henry Ford and The Controversy of Zion by Douglas Reed. Despite the bans on these books, admiration for Mr. Soral in 2018 is higher than ever.

Scraping the bottom of the Nazi barrel

The controversy surrounding the republication of Mein Kampf allows an insight into the proliferation of racist and anti-Semitic texts, which are finding an ever-growing readership. It seems that this ideology is becoming more normalised, and that there is an aim to rehabilitate the banned authors. In 2006, the journal of Nazi Propaganda Minister Joseph Goebbels was published in several volumes by the publishing house éditions Tallandier. In 2014 the correspondence between “the Hangman” Heinrich Himmler and his wife were released to the outside world. One year later, The Ruins, the landmark work of the French fascist Lucien Rebatet, was republished by the publishing house éditions Robert Laffont, and the journal of former Third Reich minister Alfred Rosenberg was released by Flammarion.

In early 2018, the announcement of the republication of the outrageous texts of Louis-Ferdinand Céline provoked outcry. The historian André Loez laments that we are “scraping the bottom of the Nazi barrel”; the texts which inspired Zemmour, Soral and eventually Dieudonné, and which fuel the fires of the global far-right. Mein Kampf and its adherents will never stop haunting memories or driving the forces of death and destruction. Time will tell if Fayard is to lead the way.