Yan Arthus Bertrand’s sublime film, Legacy, captivates us with gorgeous images. First, the environment is staged in an enchanting, majestic, peaceful way. Then comes the break with modernity. Human’s industrialization and the thirst for progress blight this marvelous landscape. Human activities are put forth for being the primary cause of the environmental crisis which arises before our eyes.

Far from moralizing us, he carries a message of hope and benevolence. A specific sentence resonates within us. He quotes Alphonse de Lamartine, a poet, novelist, playwright and political figure of the 18th and 19th century, saying “We do not have two hearts, one for animals and one for humans. We have one heart, or we do not have any”. Here, he refers directly to animal suffering caused by a consumer industry. Change in diet is presented as a solution on an individual scale to begin decarbonizing our lives and so ultimately slowing down the climate change gear.

Beyond animal suffering, this sentence also refers to intensive agriculture and faring which fully participate in the loss of biodiversity. In fact, according to the Global Environment Outlook 6 report (GEO6) of the European Union, 50 percent of inhabitable land is used to produce food, 77 percent of it being used to feed farm animals. However, the livestock industry barely provides 17 percent of food energy and 33 percent of protein requirements. But it contributes to more than 80 percent of global deforestation. Going back to Yan Arthus Bertrand’s common thread, what drives us to continue to develop ourselves is mastering each energy chain. However, it is clear that the energy that is transmitted by the food we produce is far from optimal. For example, soy imports to Brazil to meet the protein needs of livestock in France have a major impact on biodiversity and destroy the environment for a suboptimal nutrient energy gain. This invites us to rethink our food system.

In food sociology, it is considered that nutrition is not simply an essential daily practice, but that is it also linked to beliefs, cultural codes, social and economic criterions. As a result, our nutrition is socially constructed. In this sense, it is vectoring a sociocultural identity, as well as social representations and economic practices.

In fact, since ancient times two food models differ. On one hand, the hegemonic model that we know promotes meat consumption, and on the other hand, the vegetarian diet led by Pythagoras and his candidates. Hence, food “war” is far from recent and is anchored in human history. However, it has been heightened by technological development which allows us to see in a short period of time the environmental consequences of our eating habits. 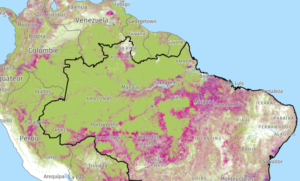 Map of the loss of the Amazon tropical forest (source: Global Watch Forest)

For example, this map which comes from Global Watch Forest represents the loss of the Amazon tropical rainforest for the past 20 years mostly linked to human activity (but not exclusively). The Amazon rainforest is eaten away bit by bit and replaced by agricultural and farm plots that are getting closer to its center.

In addition, the historian Lynn Toewsend White helps us understand that during the Middle Ages the anthropocentric view of the environment was predominant. The environment is subject to man’s handling creating a hierarchy of species. Animals end up serving human domination. Even though Charles Darwin’s theory of evolution allows us to question this growing social anthropocentrism, it grows even more under the influence of economic ideals and technological development.

It was not until the Brundtland report in 1987, the Rio Summit in 1992 or the Kyoto Protocol signed in 1997 that the environment and animal rights were put on the central stage of the international scene. However, animals are still often considered from a naturalistic approach, even by environmental non-governmental organizations. In other words, they belong to an aesthetic landscape that is integrated into the human heritage that we must preserve.

Yet, the idea of animal consciousness is talked about early on. First, Pythagoras wanted to extend the concept of justice and moral to animals. Then, Jean-Jacques Rousseau said that natural right should not rely on reason anymore but on the sensitivity of living beings. This idea would allow us to reduce animal abuse. It is considered by Kant as a lack of duty to oneself. For Claude Lévi Strauss, acts of cruelty towards animals increase the tolerance of violence towards humans. In addition, the anti-speciesism concept, based on the structure of sexism or racism, allows us to question this hierarchy of species by stressing that man causes animals to undergo inequalities.

In short, there are different and often conflicting concepts on animals that allow us to question our eating habits. Not wanting to raise heated debates or to start a new debate on diets, we must instead offer ourselves the luxury to question our own habits especially when they are social constructs. It is an interesting philosophical challenge of the mind that offers a questioning of where “modernity” and industrialization are heading. It seems clearer that the fight against global warming will lead to an enforcement of some of our practices.