The hidden face of the Syrian revolution

On Saturday, January 21, 2017, Sciences Po Strasbourg’s Cultural Policy and Management Masters program, in partnership with La Filature’s Festival Les Vagamondes (a performing arts theatre in Mulhouse, France), organized a public discussion with Syrian graphic artist Sana Yazigi about her “Creative Memory of the Syrian Revolution” project and Cécile Boëx, who has a Political Science PhD and specializes in the use of videography as a means of protest. Le Journal International attended the event, which shed a new light on the conflict in Syria.

Between the Islamic State (IS) and Bachar el-Assad, the Syrian people themselves only occupy a minor place in the traditional media. Presented as refugees, victims or lumped together with the term “rebels”, they are often seen only as lifeless actors, overwhelmed by their current situation. In response, Sana Yazigi created the The Creative Memory of The Syrian Revolution website in 2012 with the goal of compiling every form of expression from the Syrian people during the revolution.

A platform to save the soul of Syrians

At the time of writing, the memory interface contained more than 22,000 pieces, split among some 23 categories. The various forms of expression are indexed, including graffiti, theater, sculpture, caricature, comics, protests, music and chants. “We are looking to contextualize the works, to indicate the place, the name of the artist, the date, to allow for a consistent and complete reading for each piece,” explains the Syrian graphic artist, underlining the educational aspect of the project.

Though it “is always hard to choose out of the tens of thousands of pieces,” Mrs. Yazigi showed a slideshow of some of these outstanding creations throughout the discussion. She first talked about graffiti, noting the Deraa children in particular who wrote a hostile slogan towards Bachar el-Assad on their school’s wall in March 2011: “Your turn will come, doctor.” The arrest and torture the young authors of this sentence sparked the first protests. “Who would have thought that graffiti and words would set off this movement as well as these atrocities?” asks the lecturer. 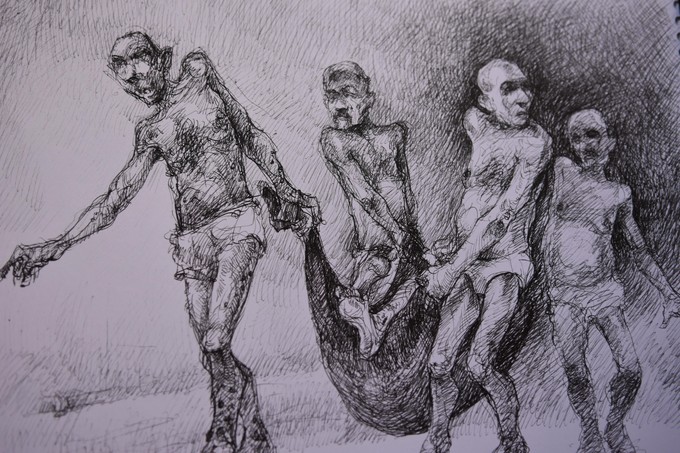 Even more than death, the Syrian people fear the regime’s prisons. “The fear of being arrested pushes us to ask for political asylum. Incarceration under Assad is worse than death, and a lot of testimonies confirm it,” explains Mrs. Yazigi while projecting a piece by the Syrian artist Najah al Bukaï. Mr. al Bukaï was incarcerated three times because of his negative opinion of the regime. Now a refugee in the Vendée, France, the fine arts professor recounts the worst hours of his existence through raw, realistic drawings with harsh features. There are still “thousands of prisoners of conscience in the regime’s prisons.”

Speaking out during war despite censorship and repression

The Syrian people started expressing themselves from the very start of the revolution and haven’t ceased since. In 2011, after the arrest and torture of the young graffiti artists who wrote “Your turn will come, doctor,” Syrians protested in Banias, in Northwestern Syria, waving around roses to emphasize the peacefulness of the protest movement against the regime. “We always forget that the first to say that IS was here were the Syrian people,” adds Mrs. Yazigi. ”In September 2013, in the streets of Aleppo, the Syrian people were waving banners that said ‘IS comes from Assad’.” Once Raqqa had been taken by IS, certain civilians continued expressing themselves, finding ways to bypass censorship and repression. For example, one protestor took a picture of his palm where he had written, “From Raqqa, I am beheaded in silence”.

The “protest of roses” in Banias in 2011, credits to Syrian Freedom & Creative Memory

Graffiti is a privileged mode of expression during the revolution. “All Syrians use it, everywhere: on the walls, buses, buildings and even public bins. We left graffiti everywhere. It’s the most popular medium. It’s even been used to create other pieces,” explains the Mrs. Yazigi.

Beyond graffiti, war memories often entail other mediums of expression that are more graphic, such as the painting series by Tammam Azzam that pictures the devastation and destruction of certain cities like Aleppo, Homs, Darayya or Deir Ezzor. Still others consist of chants, theater pieces or even short protest films. “These pieces really give me hope. It proves that the regime did not succeed in killing us, we are still here, the cause is alive and well,” says Mrs. Yazigi, not without emotion.

The two refugees, a play by the Malas brothers about the difficulties experienced by thousands of refugees as they create new lives in France

The Syrian protest: between appropriation and reinvention

Cécile Boëx lived in Syria for ten years and used Mrs. Yazigi’s work of as a base for her analysis of the use of videography by Syrian activists during the Syrian revolution. She notes the neccesity of archiving and collecting work, which has been inspired anew by the complexity of the ongoing events. The work gives the revolt an intimacy and, in a way, historicizes the conflict: “We lost track of the Syrian people, ordinary people, those who for three years went to the street risking their lives. All of those people who became victims in the media, showed in misery and death, without ever seeing justice.”

Around a hundred thousand videos published on YouTube about the Syrian conflict, but only those concerning IS or Bachar el-Assad get multiple views. This hierarchy of videos shows that, despite the access offered by the internet, certain images are not powerful enough to address a larger public. 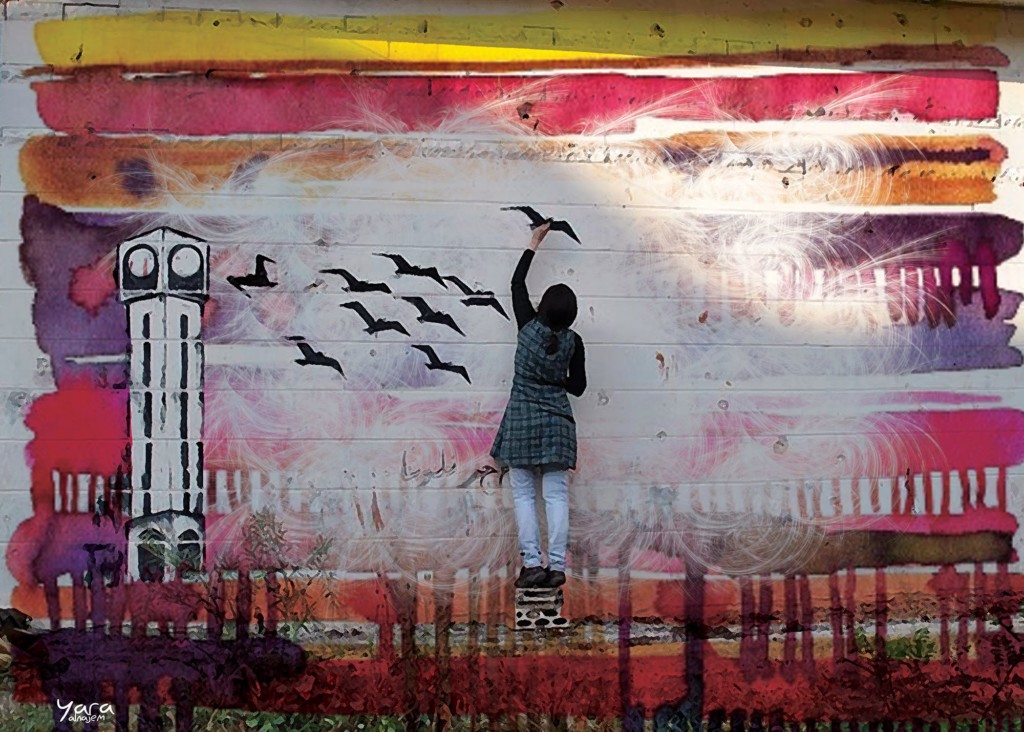 To give a “brief preview of this protest culture” in film, Mrs. Boëx first presented a protest organized during the Euro 2012 in the city of Idlib. Inspired by the culture and effervescence of the football season, the protesters used signs held towards the sky in the camera’s angle to reproduce a football field where the regime’s team opposed the protestors’ team. After some time, the protesters turned the signs around to show different messages denouncing Bachar el-Assad in both Arabic and English.

Thousands of acts like this exist, each one unique. To protest the UN representatives charged with negotiating peace between the two parties, the Syrian people produced an amateur short film featuring martians coming to deliver a message of peace and love with plastic, scentless flowers. Behind the scenario’s absurdity hides a metaphor that criticizes the uselessness of international actors in the conflict’s resolution.

Finally, Mrs. Boëx talked about a method of action invented by Syrian women that does not technically exist anywhere else: the at home “sit in.” The action, entirely recorded, takes place in a private environment. This type of protest generally includes about a dozen women, either showing their faces or hiding them. They unite to honor the revolution’s martyrs whose portraits are made public, but also to contest the regime through the national anthem or protest chants. Participants then shift from the private environment when they publish the recorded version on the internet. The form of  different “sit ins” may change, but the purpose remains the same.

The future of the Creative Memory’s collection

The Creative Memory website has much to offer. First, the advantage of memory breathes new life, once denied by traditional media, into the Syrian people. Whether it be directly on the website, or exposing printed versions of the archived pieces, Mrs. Yazigi has succeeded in making available this forgotten aspect of the conflict

Second, there are the scientific and educational advantages. Mrs. Boëx has contributed by illustrating the diversity of the Syrian protest repertoire. She explains that the archives constitute a “living way,” useful for the researchers, historians, and students who are trying to better understand the conflict, today as well as tomorrow. 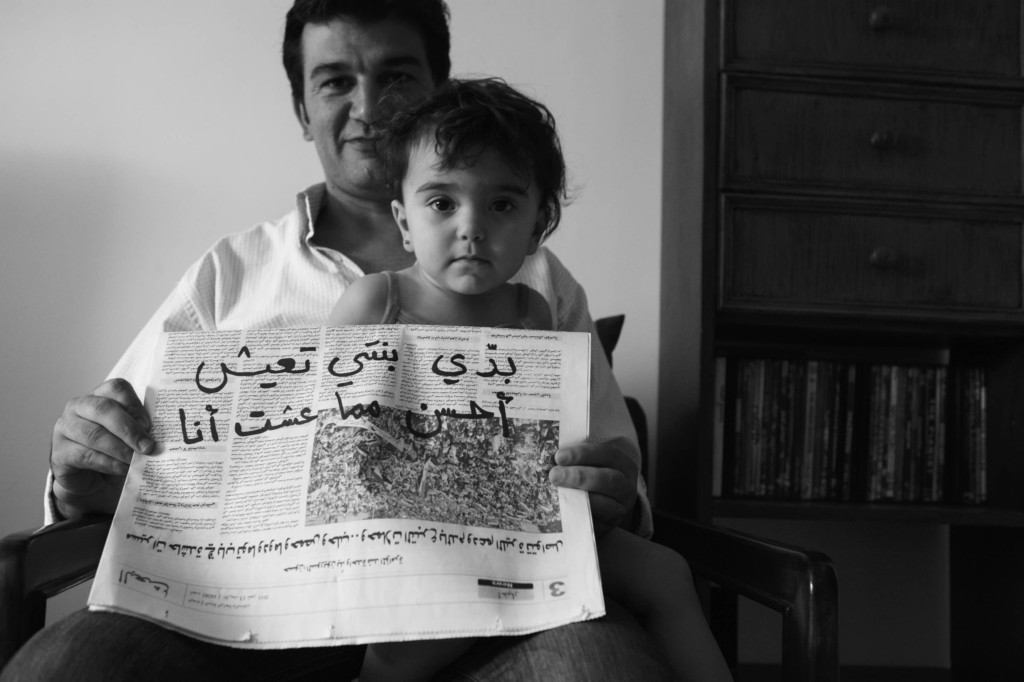 Photo Credit: Jaber Al Azmeh, “I want my daughter to have a better life than mine” Kais Zakaria – Dentist, Damas (2011).

Finally, there is the advantage aimed at protest. With the archiving of so many ways of expression, activists have access to an inspiring database from which they can pull to form their own forms of protest. The Creative Memory is unifying them while simultaneously revealing the extent of the protest and the diversity of its actors.