On January 11, The Great Wall was released in French cinemas. Produced by the American media company Legendary Pictures and directed by Chinese director Zhang Yimou, it features American actors Matt Damon and Willem Dafoe as well as famous Chinese actors Jing Tian and Andy Lau. The movie release is an opportunity for us to notice that Chinese cinema is, in fact, transforming: a change that has been characterized by complex and sometimes conflicting logics, based on Chinese ambitions. 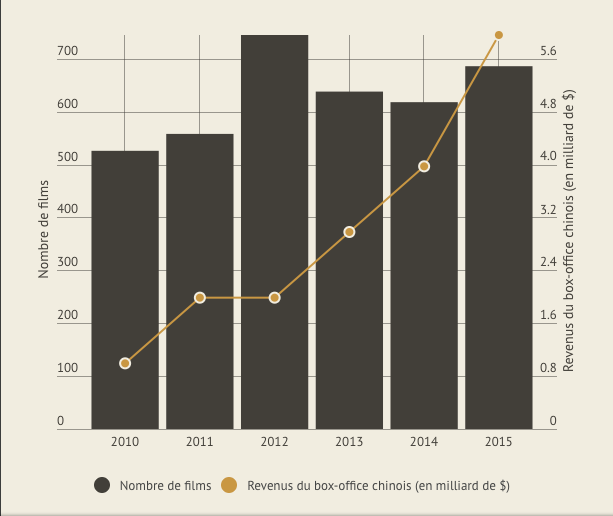 Over the last 30 years, China’s middle class has greatly expanded in parallel to its economic development. The Chinese middle class aspires to have spare time and to be entertained, thus it has largely contributed to the development of the film industry in the country.

While there were only 1,400 cinemas in China in 2002, this number reached almost 20,000 in 2014. In just one year, more than 6,000 cinemas opened (16 per day on average). However, even today, this market is far from reaching its peak: on average, there is only one cinema for every 56,000 inhabitants. Despite this, in the space of a few short years, China turned out to have the second largest cinema network following the United States (where there are around 40,000 cinemas). These cinemas are mostly huge multiplexes integrated in shopping malls favorable to mass entertainment. Art-house cinemas are almost non-existent in China.

2012 turned out to be the year film production boomed, with almost 745 full-length movies produced in one year. The incomes linked to the film industry grew by 40% per year between 2008 and 2014. Thus, in 2014 the revenue of the industry reached 4.8 billion dollars, making China the world’s second largest film industry.

China is moving into a blockbuster era

The dawn of the New Millennium saw the release of the first Chinese blockbusters, most notably Crouching Tiger, Hidden Dragon directed by Ang Lee in 1999, as well as Hero by Zhang Yimou released in 2002. The latter marked a shift in Chinese cinema. In reuniting several international Chinese stars such as Jet Li and Tony Leung in one large production, the film managed to achieve the second-best release in the history of American Cinema for a foreign language film. It also proved that a Chinese film could see success abroad.

Since then, Chinese blockbusters multiplied. These super-productions, shot with an amazing budget coupled with an intense marketing campaign to attract as many movie-goers as possible, represent a challenging economic issue for the government. The director Jia Zangke explains that what was considered before as ‘an ideological propaganda tool’ is now, since the 2000s, considered ‘an industry’. 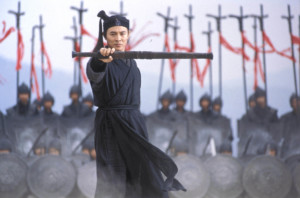 ‘It was in 2014 that the war between Hollywood and Beijing really began’ according to Zhang Hongsen, a powerful leader of the Chinese audiovisual sector. This quote confirms the decision of the Chinese film studios to be inspired by Hollywood techniques and produce mass entertainment. The same year, half of the top 10 films at China’s box office were American. In 2015, Chinese films gained the advantage with 7 films being shown compared to just 3 American ones. But in 2016, the report was balanced with 5 Chinese movies against 5 American. Stephen Chow’s comedy The Mermaid requires a special mention as it stayed largely ahead of the other titles recording $527,000.

Even if China manages to compete with American production on its local market, Hollywood remains one step ahead. Especially if one remembers that movie distribution is limited by the power in place. The Film and Television Bureau controls the cinema industry in China. This authority is itself under the supervision of the SARFT (‘State Administration of Press, Publication, Radio and Television’). This organisation oversees the Chinese media production and keeps the power at all levels. The authority decides how and which movies will be broadcasted. Above all, it sets a quota for the number of foreign movies transmitted on Chinese territory.

The import of foreign movies is limited to seventy films per year. A number chosen and strictly enforced by SARFT. Around forty films are broadcasted based on a fixed amount (producers earn a fixed amount set by authorities, independent from the movie profits). Thirty-four movies are authorised in revenue sharing, with a percentage revenue fixed between 20 and 25% for foreign distributors.

There is also a limit imposed on the run-time of foreign movies. They are shown in the cinema for two weeks on average, and authorization is required to extend this limit. Distribution conditions are complex: foreign distributors cannot promote their movies themselves, they must go through import companies that submit the movie to the authorities for authorisation and information on a run-time and broadcasting conditions.

Many American directors establish partnerships with Chinese directors to get around the quotas system. Movies such as Transformers IV or Iron Man 3 took advantage of this, but it often results in a change of content. For example, a movie has to feature Chinese actors and product placements, or even, in the case of Iron Man 3, needs to create a special version dedicated to Chinese cinema. Because of this, some people are claiming the influence of China on American cinema.

The MPAA (Motion Picture Association of America, an association standing for benefits for big Hollywood productions) is supported by the largest movie studios. For several years now, it has supported the removal of the quotas under international discussions. Americans are especially trying to reopen discussions under the scope of the WTO, to make quotas fall in 2017. This issue has become a real diplomatic problem.

Even if it is still largely dominating, American cinema seems to see its success weaken by any Chinese production that does well. The latter wins in quality as well as in market shares. From June to August 2012, SARFT launched a phase of “domestic film protection” which as a result, blocked almost all foreign movie imports. It was however, a failure. Even if Chinese movie attendance increased at the beginning of the period, it ended by slowing down. American movie attendance however, rapidly shot up when the restriction was lifted. At the time, it clearly showed the superiority of American cinema over Chinese cinema, but if the experiment were repeated today, would the result be the same?

The will to export Chinese culture abroad

Another key issue for Chinese power is to use the cinema industry to establish a strong soft power. It allows China to simultaneously sell the Chinese model to the world and at the same time assert itself as a cultural power. In 2011, a survey carried out by the French Academy for International Communication and Chinese Culture led by young foreigners, found out that a third did not know anything about Chinese films, half of them knew very little, and only a fifth watched Chinese films on a regular basis. This survey also discovered that it was mostly Asian people who were interested in Chinese cinema.

The main causes of disinterest for Chinese cinema in the West are the cultural differences, the language and the scenario. Jackie Chan and Ang Lee are the most famous actor and director respectively but they also had a successful career in the United States. It can then surely be concluded that young people are interested in Chinese cinema.

Speaking on the same topic, director Feng Hiaogang relates, ‘I often hear foreign filmgoers say ‘interesting’ as they leave the cinema, but my friends have explained to me that it is not a good term to use to judge a movie. It is like saying, ‘I don’t understand this movie’. So that means that the only feeling Chinese movies give to foreigners is ‘interesting’. This questions the accessibility of Chinese movies to westerners. Which is the same when it comes to blockbusters, intended for a larger audience.

A successful production in Asia

This analysis has to be modified slightly. Indeed, Chinese movies have a relatively low visibility in the Western world, but they do reach an audience in other Asian countries. Thus, The Mermaid, released in 2016, recorded good results in Malaysia and in Singapore.

China’s strategy on the subject seems to be limited. Blockbusters are successful locally and in bordering countries, but is seems that, for the majority of the time, the Western world remains insensitive to the Chinese soft power. If there is one person who has ambitions regarding the Chinese soft power, it is without a doubt, Wang Jianlin. 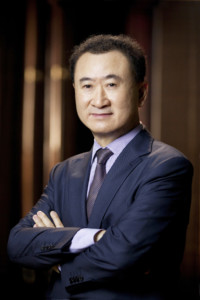 Wang Jianlin, 62, is a leading figure in China’s cinema industry. He is the businessman at the head of the Dalian Wanda Group, and ranked as China’s richest man in Forbes ‘annual ranking. In 2013, his group invested in a giant studio in Qingdao in order to accommodate the biggest Asian productions. The opening is expected in 2017. Will it become Chinese Hollywood?

In 2014, the company prided itself on owning 1,616 screens in continental China, but that is not all. In May 2012, the firm bought AMC theaters, the second biggest cinema-owners in the United States. Wanda then became the world’s largest cinema owner. The firm also set up production partnerships with Sony. It also owns Dick Clark Production, the company that organises the Golden Globes. In March 2016, AMC Theaters purchased Carmike Production (with its 2,938 screens) and in doing so, made Wang Jianlin America’s biggest cinema owner with a total of 8,272 screens.

The Great Wall: the breaking point?

The buying of the company coincided with the release of The Great Wall, a long-term project. The movie, directed by Zhang Yimou sees a group of Europeans and a group of Chinese fight against a monster invasion in 15th century China. This Chinese-American co-production is already expected to be the most expensive production in China’s film history ($135,000,000). It reveals China’s intention to internationalize, but at the same time, the American desire to penetrate into a Chinese market that limits foreign film imports.

It seems that the history of Chinese soft power is experiencing a period of change. The Great Wall by Zhang Yimou seems to be the source of many financial and cultural issues. Obviously, China wants to be able to export its own ideals and stand its ground if it means to cooperate with foreigners. But what will be the results? We shall have to wait.