On September 22, the 4th Alternatiba Leman festival took place in Geneva, Switzerland. A festival which offers local alternatives to live and consume in a more sustainable way and in agreement with our environment. The Bastion park was filled with thousands of people for the occasion.

“Changing the system not the climate”

Before anything else, Alternatiba is the story of a couple of men and women who decided, in 2013, to create a citizen movement for climate and social justice. It was in Bayonne, France, that the first village of alternatives was born, while the section I of the IPCC 5th report (Intergovernmental Panel on Climate Change) reaffirms the impact of human activity on global warming. The enthusiasm of 12,000 people allowed them to call for the creation of hundreds of Alternatiba in France and abroad.

Alternatiba is based on the observation that global warming is accelerating and that it is time to act to avoid reaching the limits of unstoppable climate bolting. For this reason, the festival offers alternative solutions and aims at reinforcing them to raise awareness among as many people as possible. The goal being to change the system, not the climate.

Multiple actions thanks to more than 150 collectives

This movement got bigger over the last few years with more than 150 Alternatiba collectives spread all over France and beyond. Switzerland, Senegal, Haiti, Spain and Great Britain are parts of it.

These popular open-air universities are a way to reorganize the public space around all the spheres of our society. Indeed some fields are directly affected by climate change : economy, agriculture, food, transport, education and energy. More than an altruistic function, some real mobilizations aim at widely spreading the alternatives’ message. A lot of citizen protests took place approaching the COP21 and more recently against the the free trade agreements. The movement also owes its success to the “Alternatiba Tour”, a four-month-bike-trip across France and border countries. This journey aims at showing that a different social and economical system is possible for our world.

The festival was exported to Switzerland in order to mobilize the civil society players during the COP21. Then the construction of a Genevan region and of a sustainable, fair and united cross-border identity became central to Alternatiba Leman. If the climate question is omnipresent at the festival, the society organization and the development model are also essential.

It is for these reasons that hundreds of organizations and associations were present on September 22. One of them was the association/grocery store Le Bocal Local (the local jar in English), represented by its co-creator Déborah. 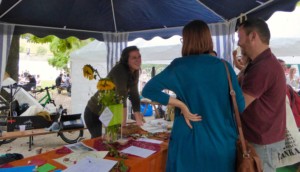 It has been three years now that Déborah has been taking part in the Alternatiba Leman festival. Her association, Le Bocal Local, offers alternatives and promotes eco-responsible citizenship. The grocery store has package free products – locally produced for most of them – in order to encourage the interdependence between health and environment with the idea of “consum’action”. This bulk store is the typical example of a system in which it is possible to consume differently, in a reasoned, local and organic way, to reduce our ecological impact. These behavior changes are signs of solidarity and of the creation of a social cohesion. These elements are the main components of the association Le Bocal Local.

This way Déborah tries to create a support network between consumers by forming synergies between the society players. She privileges cooperation over competition by collaborating with various associations which share the same values.

The construction of a collective conscience

In Switzerland like abroad, the festival’s popularity has been increasing for a few years now. More than that, Déborah sees a growing collective conscience disrupting all the spheres of our society. Citizens realize that the planet is in danger and that it is an emergency to act. They are more and more to fight against the destructive system in which we live.

The Alternatiba festival reminds us that climate change and environment protection are issues that concern the whole society prism. Alternatives are wide, multiple and over all within easy reach : we just need to grab them!