TRANSLATED BY JOYCE CHEN AND PROOFREAD BY RHONA KAPPLER

It has been over a year since the Colombian government and the Revolutionary Armed Forces of Colombia (FARC), a far-left guerrilla movement, signed a peace agreement, and since the latter’s transformation into a political party. This agreement is yet to be received unanimously by the people of Colombia.

The referendum that took place on 2 October 2017 is proof of this. Although it was a close call, with 50.2% of the population voting ‘no’, the decision was final. However, after minor changes to the text, the government signed a revised version of the agreement on 24 November that same year. This time, the ratification was submitted directly to Congress instead of seeking approval from the people. Some citizens thus viewed the agreement as an act of force by those in power. This opinion was also shared by Juan Manuel Santos who, let’s not forget, won the Nobel peace prize in 2016 for his work and involvement in this agreement.

A part of the population left feeling indignant

Additionally, a part of the population feel rather indignant towards the terms of this agreement as the jurisdicción especial para la paz (JEP) included an exemption for FARC fighters charged with ‘minor’ offences. Many have spoken out against this, including one man we interviewed, who wishes to remain anonymous. “Every family has been impacted by this conflict, whether it be from near or from far. Every family has been tormented by the anguish of having someone close being taken away from them. I myself was forced off my own land. They think that they’ll be able to fit in with our people without any consequences. They’re wrong.”

This hostility is manifested in numerous cases of assassination against human rights activists, social leaders, as well as past FARC members and their families. According to a report published by the Foundation of Peace and Reconciliation in July 2017, ‘five homicides of members of this guerrilla and ten others of those closely affiliated with the guerrillas have been recorded.’ This demonstrates a strong opposition coming from one part of the population. This opposition, however, could weaken the agreement and paradoxically lead to a repetition of violent conflict. Nevertheless, this violence has been the main source of resentment towards the guerrilla movement for over 50 years. 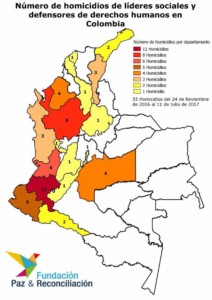 A map from the Foundation for Peace and Reconciliation.

In addition to this split in the population regarding this agreement, the political world is in turmoil. Alvaro Uribe, ex-President and now Senator, was the figurehead for the ‘no’ campaign in the 2016 referendum. During his presidency, with help from the United States, he implemented a major armed campaign fighting against drug trafficking and armed groups within the Colombian territory. Since then, and up to the present day, he has proven himself to be more of an advocate for conflict rather than negotiation.

In terms of the legal and juridicial implementation of the agreement, there are further complications.    In March 2017, the Colombian congress refused to approve, through various decrees, several points in the agreement. Their reasoning was that according to them, the government did not provide a strong enough argument for these points. Numerous judicial appeals are often made by politicians who oppose the agreement, which delays the legislative implementation of the text. This legal implementation is important because it allows the agreement to have a coercive factor, both for the government and for FARC’s political party. This is why the existing government launched a mechanism known as ‘Fast-Track’, a way of minimising the time needed to approve the leyes de la paz – the laws of peace.

On 16 November 2017, the supreme court of Colombia adopted the Legislative Act 2 of 2017. This consisted of a legislative ‘shielding’ of the peace agreement for the next three presidential mandates, meaning that it cannot be called into question. However, some Colombian newspapers and another report from the Foundation for Peace and Reconciliation denounce the fact that a future Head of State who is opposed to this agreement could find ways to circumvent the decision. One example of how this could be avoided is to hold a public referendum. Institutional mechanisms are thus used by both sides in attempts to speed up or slow down the implementation of this agreement.

A long way to go before achieving complete peace

Origins of armed conflict in Colombia extend far beyond the peace agreement between the government and the FARC. The signing of this agreement does not represent the end of violence in the country.

In fact, the Foundation for Peace and Reconciliation’s report also highlights that in many of the cities controlled by FARC, there is no state presence. Other armed groups have hence moved to these cities to exploit their spaces and resources.Some of the main armed groups still existing and active in the Colombian territory include the ELN  – Ejército de Liberación Nacional – and the most powerful drug trafficking groups in Colombia today, El Clan del Golfo. Even though the ELN is currently under the yoke of a ceasefire and is beginning negotiations with the government, total peace is still a utopian dream. Similarly, although Juan Manuel Santors claims that the Clan del Golfo is willing to surrender, they were recently the subject of the biggest drug seizure in Colombia’s history.

The peace agreement with FARC poses a paradox: on one hand, an attempt has been made towards peace but, on the other, for other armed groups to take their place.Consequently, even if violence seems to be decreasing, peace is far from sight, and there is still a long way to go.