Democracy Wall: a test for the freedom of expression in Hong Kong

Papers are stuck upon one another disorderly on “the wall” as though they are created with much spontaneity and minimal care: open a new Microsoft document, type a few words, enlarge them and print – a poorly put-together improvisation. 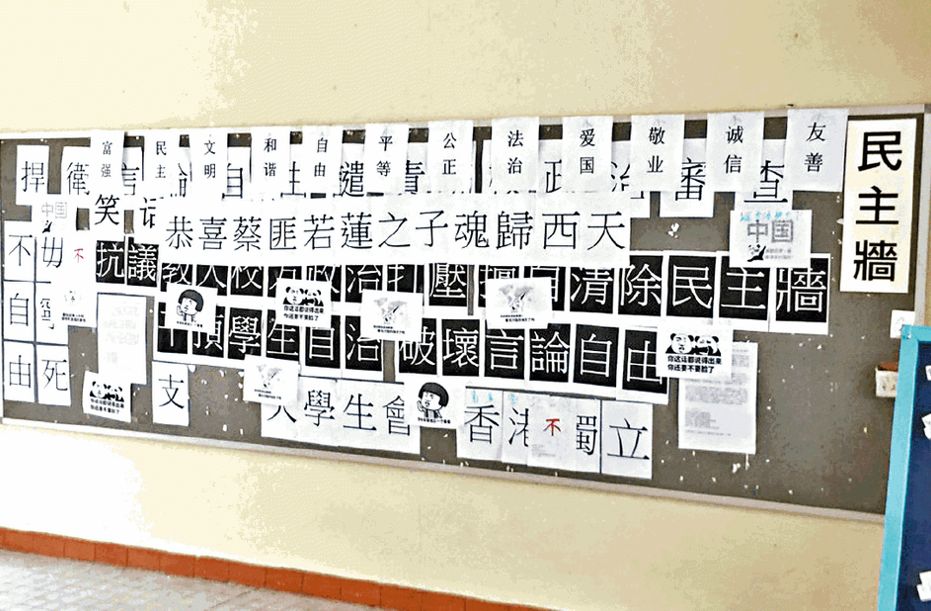 Posters “congratulating” Choi Yuk Lin for the alleged suicide of her son on the democracy wall. Source: mingjing news

It characterises the common features of “the wall”. The chaos of mismatching colours and appalling designs, combined with the often political messages printed, only make the democracy walls in Hong Kong’s universities more intriguing and photo-worthy.

But this time, the message took an offensive turn. “Congratulating Choi Yuk Lin’s [education undersecretary] son on going west,” it read on the democracy wall of the Education University of Hong Kong, after her son allegedly suicided in 2017. It is suggested that the posters are a manifestation of hatred towards Choi, noting her political allegiance to Beijing.

Undoubtedly, the message sparked an outcry from the government, the university management and the studio union of the university. As controversy kicked in, many begs the question: what are the boundaries of freedom of expression?

Known as the “democracy wall” colloquially, bulletin boards are placed in accessible places on campus, serving as platforms for students and staffs to express their personal opinions, from the quality of the campus canteen to governmental measures.

Politically-charged messages are no stranger to the democracy wall. Banners like “Release Liu Xiaobo”, as well as satirical remarks of the status quo of Hong Kong, are commonly displayed on the board.

In recent years, with increasing fear about China’s political interference, the focus of the discussion has been on whether “censorship” of politically sensitive messages is justified.

Last year, the executives of Polytechnic University took over the democracy wall after the student union failed to comply with their instructions to remove messages alluding to Hong Kong independence. Outraged by the disregard of expression freedom, around 10 students confronted them at their office, followed by a hunger strike initiated by the representatives of the student union. 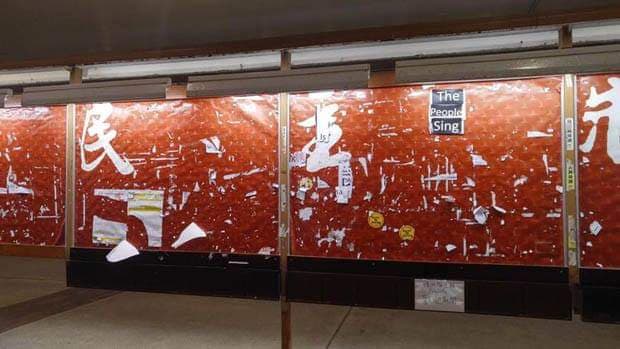 The aftermath of the removal of messages: empty democracy wall in Polytechnic University. Source: RFA

Among them, four active protesters were penalised, after the disciplinary committee of the university concluded they had “defamed”, “assaulted” and “battered against” university staff earlier this year. Gerald Jun Him was expelled and barred from reapplying, Lam Wing Hang was suspended for a year, and Owan Li and Hazel Cheng Yuet Ting were to render community services for 60-120 hours.

Similar events unfolded in other universities in Hong Kong too. The slogan, “I support Hong Kong independence”, appeared on the wall in September 2018, following the government’s ban of Hong Kong National Party, which is a keen supporter of Hong Kong independence. Subsequently, the message was taken down by “unidentified figures”. What differentiates the situation of democracy walls in Polytechnic University is that the consequences met by the students in question in other universities were never as grave.

With incidents as such breaking out in universities in Hong Kong, it gradually becomes clear to students – certain political ideals are turning into taboos despite the freedom of expression granted by Hong Kong’s mini-constitution, the Basic Law.

“The core values of the university are academic freedom and freedom of speech,” said Zhang Xiang, the President of the University of Hong Kong (HKU), “…but I do not want the university to turn into a platform for political pursuits.”

The statement echoed a joint statement issued by 10 University heads in Hong Kong in 2017. It claimed: “We treasure freedom of expression, but we condemn its recent abuses. Freedom of expression is not absolute, and like all freedoms, it comes with responsibilities. All universities undersigned agree that we do not support Hong Kong independence, which contravenes the Basic Law.”

The leader of Hong Kong, Chief Executive  Carrie Lam said: “The government will not condone any forms of speech that seek to go beyond the limits set by Xi Jinping, [which is to forbid any activities that jeopardise national security and any discussion on sovereignty]. I hope students and the school will resist what is unreasonable and unlawful.”

The emphasis on political correctness, though, has caused dissatisfaction, particularly within the student body.

“Favouring Hong Kong Independence is merely a stance,” said Au Cheuk Hei, the student union president of the Chinese University of Hong Kong, “students should be able to provide insights on what they think is right.” He added, “the government [should not] confound academic interaction on a certain issue with the dissemination of a certain ideology.”

An HKU student, Michelle, supported similar rhetoric despite holding the opposite stance on the issue of independence. “I think that Hong Kong should be a part of China,” she said. “Having said so, the government can’t just tear down messages for the sake of political correctness. Everyone is entitled to their opinions.”

The debate on the limits of freedom of expression in Hong Kong has loomed as a heated topic amongst the international community, as many observe China’s increasing censorship on the freedom of the autonomous city.

Earlier this month, the British Parliament published a report on the effectiveness of the Sino-British Joint Declaration, which is a universally recognised treaty about the handover of Hong Kong from the UK to China in 1997, in protecting human rights. In particular, they demonstrated their apprehension towards “breaches of the right to freedom of expression”.

In addition, according to the US Department of State’s annual report on human rights, “some SAR [Special Administrative Region] and central government actions restricted or sought to restrict the right to express or report on dissenting political views, particularly support for Hong Kong independence”.