“Guilty for daring to spread hope”: The Case of the Umbrella Nine

In the morning of April 9, a District Court of Hong Kong sent the nine key figures in the Umbrella Movement to prison for up to 16 months. Breaking out in 2014, the peaceful street-occupying movement was a response to a highly restrictive electoral system proposed by China.

With approximately 1.2 million participants, the movement was the largest in recent decades, and the duration – 79 days – made it the longest demonstration in Hong Kong’s history. 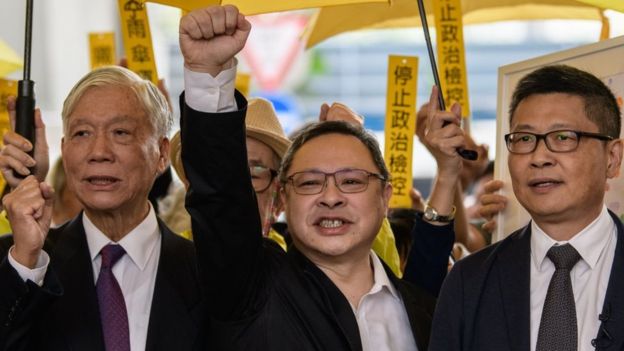 The three initially planned to carry out with the occupation on October 1 and retreat within a few days and then hand themselves to the police. They chose that day, a public holiday, because they wished to minimize the impact of the occupation on the lives and socio-economic activities of ordinary citizens.

The nine democracy movement leaders are the last to be charged and convicted for the Umbrella Movement. All nine were at the scene and are considered to be among the leaders of the movement by the Hong Kong government and Beijing.

The Department of Justice indicted them for conspiracy and incitement in 2017, three years after the Umbrella Movement. The charges are not statutory crimes but crimes under common law. This gives the judge more liberty in conviction and sentencing.

How it all began

In 2013, a local newspaper published Prof Tai’s article discussing civil disobedience as a means to achieve true universal suffrage in Hong Kong. In March that year, he held a press conference with Dr. Chan and Rev. Chu to announce their conception to civil disobedience. This was cited by the prosecution as proof of their conspiracy.

The occupation aimed to force Beijing into allowing Hong Kong universal suffrage in electing the chief executive, the city’s leader, without imposing any restrictions on the candidacy. Democratization and free general elections are a part of the promises made during and after the handover negotiations and were enshrined in the Hong Kong Special Administrative Region Basic Law, the city’s mini-constitution.

However, the resolution passed by Beijing on August 31, 2014 sett the agenda for introducing general election for the top position with many restrictions on the candidacy. This was met with much opposition in Hong Kong and ignited student strikes and protests.

The movement quickly ignited on September 28, 2014, when Tai, Chan and Chu and the student leaders agreed to announce the early commencement of Occupy Central, in support of the student protesters outside the Government Headquarters.

Armed police fired tear gas at the peacefully gathering crowd, mostly students, in a vain attempt to disperse them. Despite the nonviolent nature of the movement, some were beaten by the police. 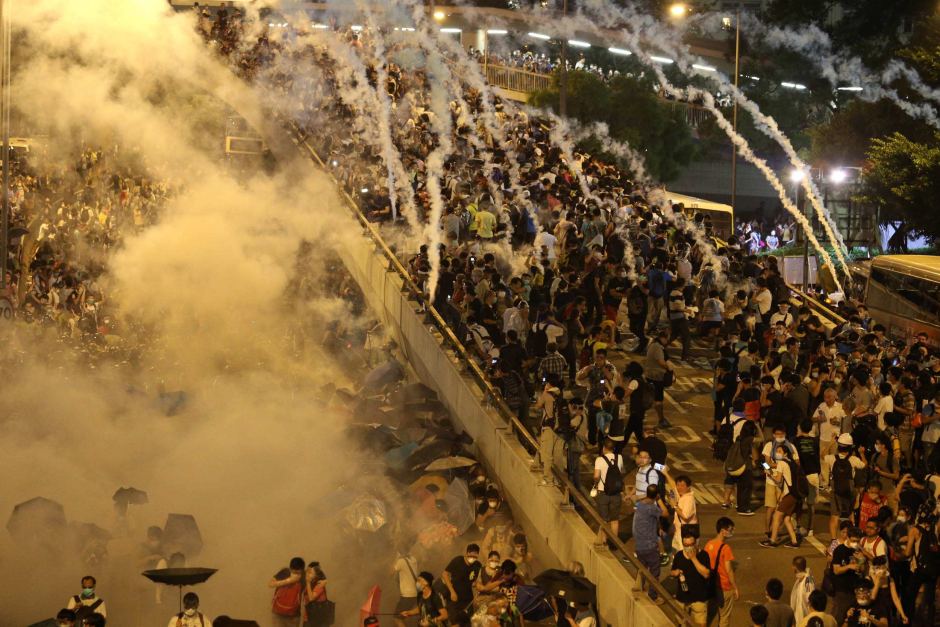 The police fired tear gas to the protestants in 2014. (Source: AFP)

This led to the escalation of the pro-democracy protests into what is called the Umbrella Movement, which occupied various business and government districts including Admiralty, Causeway Bay, and Mong Kok. The occupation henceforth lasted 79 days before being cleared out by law enforcement under court order.

“If we were to be guilty, we will be guilty for daring to share hope at this difficult time in Hong Kong.”

The defense argued the obstruction of public roads was not intended but was the result of the police blocking the demonstration area.

“The purpose of civil disobedience is not to obstruct the public, but to arouse public concern to the injustices in society, and to win sympathy from the public on the cause of the social movement,” said Prof. Tai in his closing submission in December 2018. If obstruction were the goal, the movement would not be self-consistent, he said.

“If we were to be guilty, we will be guilty for daring to share hope at this difficult time in Hong Kong. I am not afraid or ashamed of going to prison. If this is the cup I must take, I will drink with no regret,” he ended his closing submission.

In the verdict, Judge Johnny Chan wrote Prof. Tai and Chan and Rev. Chu were “naïve” to think that “a concession to introduce the form of universal suffrage advocated by the Trio could be made by the government overnight with a click of fingers” and “a mass protest of tens of thousands of people could be dispersed overnight even if a positive response were to come from the authorities.”

Civil disobedience is not a valid criminal defense, he decided. The court should only look at the fact that obstruction was committed and the relevant legal facts, not the motive of obstruction.

During the mitigation session before sentencing, Prof. Tai and Chan did not plead but only asked the court to not hand the 75-year-old Rev Chu a prison sentence. Rev Chu himself then delivered a 30-minute mitigation statement, recounting his life story of a pastor who dedicates himself to social work and social justice.

“The person being prosecuted is everyone”

“I have nothing to plead,” said former student Chung Yiu-wa in his statement. “The person being prosecuted is everyone who has participated in the Umbrella Movement, and everyone who cherishes Hong Kong. What you need to know is not the seventh defendant’s [Chung’s] background or his reasons for participation. Instead, it is why these people… still do not give up on Hong Kong.”

He concluded, “it is not the case of mitigation, but comprehension, to comprehend the world ourselves, not via court or council or media or any intermediary medium. What all we have to know, the court tells none.”

According to Chung, this case is not about him or any one of the other eight defendants. They are mere representatives of the people who took to the streets from September 28 to December 15, 2014, to demand progress and democracy for Hong Kong.

He is “an Everyman,” his attorney, Philip Dykes, said.

The court announced its verdicts on April 24. Profs Tai and Chan were sentenced to 16 months’ imprisonment, commencing immediately. Rev. Chu was handed 16 months’ jail time, suspended for two years. Shiu Ka-chun and Raphael Wong were sent to prison for 8 months immediately. Eason Chung and Lee Wing-tat were sentenced to 8 months in prison, suspended for two years. Tanya Chan was granted bail until June 10 for sentencing due to her urgent brain tumor removal surgery.

Previously, three student protest leaders, Joshua Wong, Alex Chow, and Nathan Law, were given prison sentences of up to eight months in 2017, but were overturned by Hong Kong’s highest court last year overturned those sentences.

Read the full texts in English of: