With Kevin Hart’s increasing fame he was designated to be the 2019 Oscars host, these undeleted tweets were bound to be brought up. Controversy. Broken hearts. Under pressure, the comedian decided to refuse hosting the Oscars. 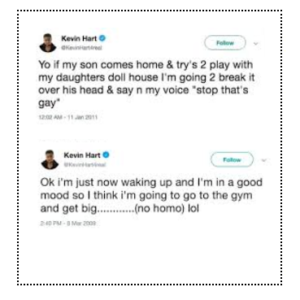 The word gay has changed its meaning many times, from “joyful”, to nowadays define either the sexual orientation or an adjective for something boring. Nonetheless Kevin Hart’s tweets between 2009 and 2011 and some bits of stand-up sound genuinely homophobic.

Kevin Hart attempted an apology in 2015 in an interview for Rolling Stone, got approved by Ellen Degeneres (a “white lesbian Oprah” and loved by many) shortly after the scandal and apologized in 2018. In spite of that this kind of “punching down” in comedy does have real-life consequences on the belittled marginalized group.

Since 2011, Kevin Hart’s humor has evolved, even if it will never reach the level of the legendary Dave Chappelle. We should also not forget the context of these jokes: stand-up is competitive: untested material, no knowledge on the reactions of the audience, finding the limit between taboo and giggles, and so many newcomers aspiring to be on Just for Laughs. In stand-up to stand out one is likely to say something that is inappropriate to others.

Public shaming is appealing. It is a form of vigilantism, a possibility of justice when enforced laws are outdated, when the legal system fails or is too slow. Many examples highlight this like the Public humiliation of Ashley Madison users, the #MeToo Movement, the Kitten Killer of Hangzhou or the YouTube cat abuse incident. Public shaming allowed to topple these people that were protected by their influence or by anonymity. It enforces social norms decreasing certain behaviour such as animal cruelty and sexual harassment.

This promotion of specific ways through digital justice can quickly evolve into something else. Thousands of people that stop only when they get tired of it.

Diagram 1.1 – Public shaming and their consequences on the targeted:

It is in her TED-talk that Monica Lewinsky mentions what many of the humiliated undergo: “Overnight I went from being a completely private figure to a public humiliated one worldwide. Not a day goes by that I am not reminded of my mistake. And I get it. It was easy to forget that that woman was dimensional, has a soul and was once unbroken“.

Sometimes these consequences feel justified while other times there lies a huge discrepancy between the “crime” and the outrage – the culprit becomes the victim.