By focusing on LGBT, Women and Racial equality, Hillary Clinton enabled the voices against patriarchy and white supremacy. These words induced fear and anger among white communities as the most extreme points of view were shared on social media. Donald Trump’s rhetoric became very appealing among many white communities and, by attempting to stitch together all these communities, Clinton appeared incoherent. This got exploited by the controversies and her finger-pointing campaign towards Trump, who in turn used her position in the system to “demonstrate that she was to blame”. The 2016 presidential election fuelled the tribal anger furthermore.

Trump’s presidential campaign for 2020 has started since his election in 2016. He has raised an unrivaled amount exceeding 100 million dollars. And as Trump has monopolized the rhetoric around identity politics, the Russia investigation and immigration among his supporters, he has a strong foothold among GOP voters.

So what about the democrats? They offer a huge variety of candidats:

The democrats are divided and will make it extremely easy for Trump to pick out his enemy. He has already done so by judging the Sanders-Clinton election controversy and by his 19 february 2019 speech. It also seems more likely that Trump supporters that will vote in the Democratic Party primaries favour Bernie Sanders due to his anti-establishment ressemblance (a big part of Trump’s 2016 campaign). With the support from quite a few left wingers, the other candidates through their ethnic-background and controversies will get a more divided amount of voters. Americans are used to an old white guy.

Both Sanders and Trump are old white men so the physical appearance / ethnic-identity that usually plays a decisive role in politics will be canceled out (which increases Trump’s appeal).

Bernie Sanders vs. Donald Trump 2020 presidential will turn out to be a fight of rhetoric and ideology wherein Trump represents capitalism and Sanders democratic socialism. Both of their socio-economic factors will put forward a campaign using their background for their campaign and attack the other candidate. Trump will play the underdog creating his own fortune once again and Sanders will play the one who fought against an unfair system or how little he needed money.

The monopolizing capitalism against society destroying socialism. Trump will use strawman-fallacies, equivocation-fallacies and, to defend capitalism and for immigration controversies, he will use Mote-and-Bailey fallacies. Talking about Venezuela and socialism can be expected. He will keep a gridlock on his supporters, as Bernie Sanders will need to rely on the education of people to understand the weight of his words, on how he brings his ideology to the more distant people and the fact that many people disagree with Trump already. 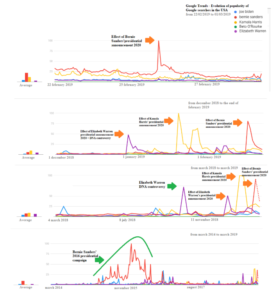