Last July, the Irish Parliament, also known as the Oireachats, rejected a bill which would have legalized abortion. Since that day, women struggle to make their voices heard in Catholic Ireland. The 8th amendment of the Irish Constitution gives equal right to life to the mother and the foetus, illustrating the difficulties in combining religion and modernity.

According to Amnesty International, 10 to 12 Irish women, aged 20 to 34, travel every day to England or Wales to have an abortion. Within the E.U. five countries still refuse to give women abortion rights unless under exceptional circumstances. In Poland and Cyprus, women can have an abortion if they were raped, suffered from incest or in the event of fatal foetal impairment. In Andorra, abortion is legal when the pregnancy poses a real and substantial risk to the woman’s life. On the contrary, abortion is illegal in Malta, regardless of the situation. In Ireland, terminations are legal only if there is an immediate threat to the woman’s life. Last July, the Parliament rejected a bill to legalize abortion, initiating a national debate on the subject.

For months now, Irish women have been protesting to repeal the 8th amendment, which gives equal right to life to the mother and the foetus, making it impossible for a woman to have an abortion if she has been raped or if the foetus is abnormal. Today, an Irish woman can have an abortion only when the pregnancy poses a “real and substantial risk” to her life. In Ireland having an abortion can result in up to 14 years in prison.

Last June, the U.N. Human Rights Committee called on the Irish government to engage in abortion law reform, declaring that the current legislation was “cruel, inhuman and degrading” for women. The United Nations also declared that by forbidding access to abortion, Ireland was violating human rights. Member states must meet their human rights obligations, which means they must decriminalize abortion and ensure, at the very least, access to abortion in cases of rape, incest, fatal foetal impairment or immediate threat to the woman’s life.

International human rights laws and standards clearly state that women should not be prosecuted for undergoing abortions. In 2015, a report called “she’s not a criminal”, published by Amnesty International, called for the Irish government to meet their obligations regarding human rights. Last summer the organization handed a 270 000 signatures-strong petition to the Minister for Health, calling for the government to engage in abortion law reform, but nothing’s changed since.

In July, the movement “Repeal the 8th” launched a fashion project to collect funds and give voice to this issue. Credit: Repeal Campaign.

The shocking case of Savita Halappanavar.

Ireland has long had one of the world’s most restrictive abortion laws. For over 20 years, Ireland refused to engage in abortion law reform, despite repeated criticisms and calls for action from the international community and the Irish people. In 2012, the story of 32-year-old Savita Halappanavar received high media coverage. While miscarrying, Savita was denied a life-saving abortion in a hospital. She died a few hours later of blood poisoning. Shortly after her death, protests took place in front of the Irish embassies in Berlin, London and even Brussels. In the wake of this event, the Parliament agreed to change the law in 2013, making it possible for a woman to have an abortion if the pregnancy poses an immediate threat to her life, including the risk of suicide.

More recently a young woman, who had become pregnant after being raped, was denied an abortion on the grounds of the law, forced to carry her pregnancy to term and had her baby delivered by C-section despite showing warning signs of suicidal tendencies. This example clearly sheds light on the struggle women face every day to assert their rights. In this case, protecting the foetus became more important than protecting the mother’s mental health. The 8th amendment pays more attention to the foetus’s life than it acknowledges risks for women’s health and life. The amendment is thus incompatible with international human rights laws, which state that rights to life are acquired at birth and not during pregnancy.

Institutionalized violence against women orchestrated by the Church and the State

In 2014, senior policy and advocacy officer for the Irish family planning association (IFPA) Maeve Taylor spoke out against the 8th amendment. “The Irish Constitution promotes outdated concepts regarding maternity, being considered as natural and primary role for women,” she said. “Women deciding to terminate their pregnancy are considered as being abnormal, deviants, almost not considered as women anymore.” Those stereotypes create an environment in which laws, politics and practices trivialize violence against women. Thanks to the 1937 Irish Constitution, The Catholic Church gained a privileged position and used it to establish a patriarchal society in which women simply must be mothers. The 8th amendment is one of the major pillars of this conservative vision.

Because of the persistence of such stereotypes, abortions continue to be highly criticized in Ireland. In public schools, children are not taught about sex, contraception or sexually transmitted diseases. Because of the 1995 Regulation of Information bill, any form of advocacy or promotion of abortion is prohibited. Healthcare professionals can be fined up to several thousand euros if they provide any information regarding abortion to their pregnant patients. The law also forbids providing information on how to get an abortion abroad. 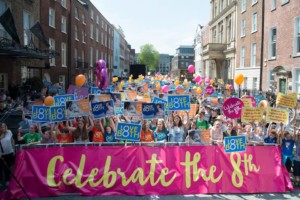 Pro-life Campaign movement rally in the streets of Dublin, on June the 4th, to celebrate lives saved by the 8th amendment. Credit: Pro-Life Campaign.

Abortion remains a strictly taboo subject in Ireland. Two movements are focusing media attention: “Repeal the 8th”, a pro-choice movement which demands that abortion be legalized and “the Pro-Life Campaign”, which is against legalization. Both movements have been organizing protests everywhere in the country, especially in Dublin, where numerous clashes between the two parties have occurred. Cora Sherlock, spokeswoman for the Pro-Life Campaign claims that thousands of lives have been saved thanks to the 8th amendment. “Repealing the 8th amendment would be a violation of a sacred right, the right to be born,” she said. Anti-abortion groups are very active in Ireland and don’t hesitate to use public intimidation tactics such as smear campaigns. One such campaign can be seen on the Pro-Life Campaign website, which reminds viewers of the gender stereotypes implemented by the Church. Per the Pro-Life movement, having an abortion is nothing but an easy way out.

Still according to the Pro-Life Campaign, having an abortion would be a much more traumatizing experience than carrying the baby to term. Having an abortion is often an answer to a complicated social situation,” says Mrs. Sherlock. “The woman is being pressured by her employer and not supported by her husband. Women have abortions because they don’t have any other choice.” In her opinion, women “don’t choose” to terminate pregnancies for themselves, but rather because of the men in their lives: employers and husbands. Per the movement, rape doesn’t legitimize abortion, which is considered as a crime.

According to recent polls conducted by Amnesty International, 87% of Irish people want a reform on abortion law. In May 2015, Ireland appeared ready for change when it legalized gay marriage through referendum. However, it seems that women’s rights remain to be conquered.