Is the Bulgarian presidency of the Council of the European Union a gateway to the integration of the Western Balkans?

Ever since Bulgaria took presidency of the Council of the European Union on 1st January 2018, this small country of just 7.1 million inhabitants has been itching to play the role of a pivotal state by prioritising the European perspective of the Western Balkans.

This goal is shared by the European Union, which published a statement from the European Commission on 6th February this year concerning its strategy for enlarging the Western Balkans, with a specified time-perspective.

Serbia and Montenegro are currently the furthest along in the process of pre-membership negotiations for 2025. Macedonia and Albania are candidate countries, and Bosnia & Herzegovina and Kosovo are potential candidates. 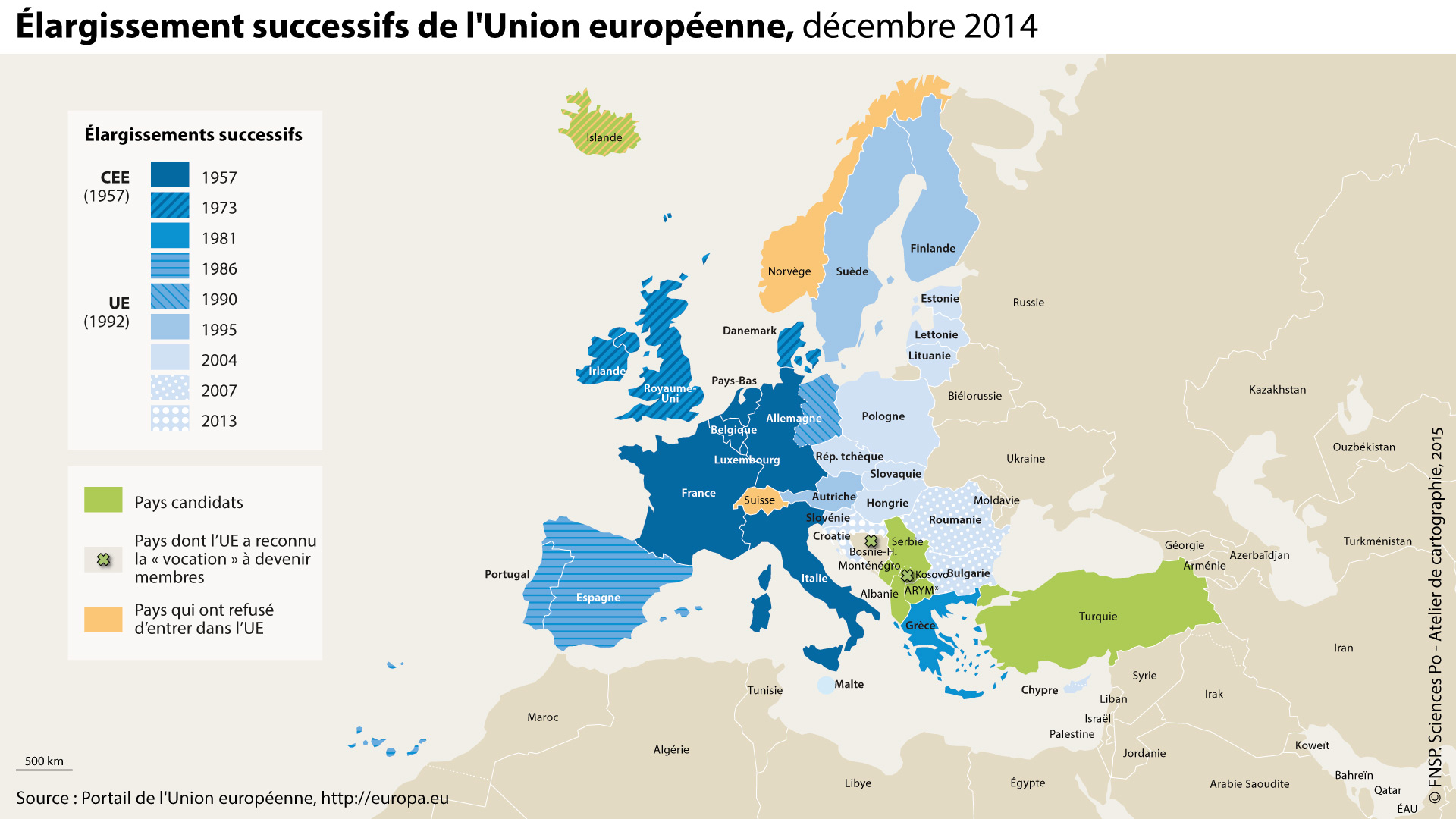 A European future under condition

The President of the European Commission, Jean-Claude Juncker, had stated in his 2014 inauguration speech that no new enlargement policy would take place during his mandate as the accession criteria had not been fulfilled, thus demonstrating the European policy of slowing down the integration process. Nevertheless, he revealed that “the current negotiations will continue, particularly with the Western Balkans, who need a European perspective”. This is essentially what seems to be lined up for the years to come.

On 6th February, the European Commission presented a statement called “A credible enlargement perspective for, and Enhanced EU engagement with, the Western Balkans”. This informative document confirms the EU’s desire to enlarge by 2025, particularly regarding Montenegro and Serbia, with whom negotiations are already advanced.

It is further emphasised that in order for the European perspective to be credible, sustainable reforms and considerable progress are essential. The Commission remembers full well that the accession criteria (Copenhagen Criteria) defined in 1993 have not been fulfilled, despite significant progress.

First and foremost, the rule of law should be reinforced: connections with organised crime and corruption at all levels are currently rife among these States. The quality of the judicial system and its independence are particularly under question. Likewise, respect for fundamental rights is a key criterion for the EU, which places particular emphasis on freedom of expression, freedom of press, and the protection of minorities from discrimination. An important testimony from the Commissioner for Human Rights highlights the fact that significant research was conducted on the enforced disappearances during the Yugoslav war in the 1990s. Over two thirds of the missing persons have now been accounted for, thanks to the European Convention of Human Rights, and the States’ obligation to investigate serious human rights violations. The International Criminal Tribunal for the former Yugoslavia (IPTY) has promised that those accused of human rights violations will be brought to justice. The progress, which began with the pursuit of war crimes at a national level, must continue and there is still progress to be made, particularly in terms of regional cooperation on this subject.

Furthermore, the regional economy must become a priority for the Western Balkan States where competitiveness is still insufficient and below the standard of the EU market. Strengthening connectivity and infrastructure between the EU and the Western Balkans will therefore be a flagship initiative.

Ultimately, the EU, whose main aim is to promote peace and stability, wishes to dedicate its support to reconciliation and neighbourly relations, and especially to what these countries “unequivocally commit, in words and in acts, in order to overcome the legacy of the past”. Moreover, a legally binding agreement on the normalisation of relations will be drawn up between Serbia and Kosovo so that each can pursue their respective European trajectory.

The path to European integration will be a long and arduous journey for the Western Balkans, but also a challenge and “a historic opportunity to link their future resolutely and unambiguously to that of the EU”. The EU wishes to portray itself as a trustworthy player through extending strengthened cooperation on the above mentioned points, and in the implementation of national reforms aiming to overcome these challenges.

During his recent tour of the six Western Balkan states, Jean-Claude Juncker brought a clear message: “continue to reform, and we will continue to support your European project.”

In an interview by Euronews in Sofia after his tour, Juncker urged the countries to reform: “What we ask from our partners in this region is to take this commitment seriously. It can’t just be empty words, they must take action, and they will. If they do not, the door will remain closed.” The President of the European commission reiterated that the deadline of 2025 is indicative and is by no means a promise. Indeed, the 2025 deadline seems rather ambitious for certain Western Balkan states, especially Macedonia, Albania, Kosovo, and Bosnia-Herzegovina, which have just reapplied to Brussels in the hope of becoming official candidates, over two years after having received it. Given that Macedonia and Albania are candidate countries, Jean-Claude Juncker gave a statement about Albania during his tour: “We’re working to prepare Albania for membership, but in order for the other countries to be able to join the EU, they must resolve their border disputes before becoming members”. He assured Euronews once more that “no state will become a member of the EU while there are still ongoing border disputes”.

Nevertheless, on 1st August 2017 the so-called historic treaty of good neighbourship and friendly cooperation between Bulgaria and Macedonia was signed, thus turning over a new leaf, even if its future application remains uncertain. It is still likely that Bulgaria will try to play a role in the Western Balkans’ integration into Europe.

Eleven years after joining the EU on 1st January 2007, Bulgaria took presidency of the Council of the European Union on 1st January 2018 and will remain in office until 30th June next year.

In its programme for EU Council presidency, the Republic of Bulgaria intends to make a point of ensuring that the Western Balkans become “a secure, stable, and prosperous region” by using its regional experience to support the reforms of the countries linked to EU membership.

Following on from the European Council in Thessaloniki in 2003 and from the Berlin Process, which was launched in 2014 and which aimed to maintain the European dynamic in the Balkans, the process of European integration has once again become a priority.

It must further be reiterated that the Berlin Process allowed some significant progress, particularly regarding reconciliation and regional cooperation in an area where bilateral relations are beyond complicated. It represents a crucial step in preventing hasty European enlargement. In term of progress, there is, for example, the creation of the Youth Cooperation Office of the Western Balkans and the strengthening of connectivity in the way of transport and energy. Furthermore, in the last summit that took place in Trieste in July 2017, it was decided that they would implement a “regional economic cooperation zone” in the Western Balkans with the financial help of the EU. A decision which, nevertheless, was met with strong scepticism.

In the Bulgarian press, the national daily newspaper “24 Chasa” emphasises that Bulgaria can develop its geopolitical role as a mediator thanks to this current presidency: “We must value our privileged position regarding the Western Balkans, so as not to waste what we have already gained: historic progress in our relations with Macedonia, and our status from now on as an indispensible mediator between the EU, the Western Balkans and Turkey.”

Nevertheless, Bulgarian public opinion appears to be divided on the matter. While some recall the merely official and symbolic nature of the rotating presidency of the EU Council, others show themselves to be doubtful when faced with the role that Bulgaria is set to play in the process of the Western Balkans gaining EU membership. “If Bulgaria announced a future summit taking place with the Western Balkans, neither Montenegro, nor Serbia, nor Macedonia could count on concrete guarantees concerning their own EU membership. Furthermore, despite Bulgaria’s good intentions and regional experience, it cannot serve as either a model or a motor for EU membership, as the country remains under the control of Brussels in the context of European supervision,” as can be found on the Bulgarian portal of the Deutsche Welle radio.

It is worth remembering the European Commission’s careful monitoring of the issue of corruption in Bulgaria. Moreover, Bulgaria is not in the Schengen Zone and its position remains marginal within the EU, despite the fact that Jean-Claude Juncker recently voted in favour of quickly accepting Bulgaria and Romania not only into the Schengen Zone, but also into the Euro Zone.

Despite this, Boyko Borissov, the Bulgarian Prime Minister, is clearly witnessing Bulgaria’s desire to make the Western Balkans “a region that is inseparable from Europe […] its integration into common security space and into economic development is of strategic importance for Europe”.  Furthermore, the Minister of Foreign Affairs, Ekaterina Zakharieva, celebrates the fact that “Bulgaria has achieved its goal of reintegrating the Western Balkans into the EU’s agenda”.

This position could easily become a positive, even symbolic, driving force, in prioritising the European integration of the Western Balkans, and of a tight collaboration with the EU on this matter.

The Western Balkans under Russian and Turkish influence

The European integration of the Western Balkans is all the more strategic given their geographical location and their Eastern neighbours, namely Turkey and Russia.

Turkey wishes to exert its influence over the former territories of the Ottoman Empire, particularly on Bosnia-Herzegovina and Kosovo, where it is multiplying its actions by emphasising the countries’ Islamic history, economy, and solidarity. Moreover, in October 2013, President Erdogan stated that “Turkey is Kosovo, and Kosovo is Turkey”.

Russia is also putting pressure on its former empire, in order to avoid a “Euro-Transatlantic alternative” from the Western Balkans, which is primarily motivated by its obsession to prevent these countries from joining NATO. Russia has also been speaking of the “betrayal of Djukanovic”, the former Prime Minister of Montenegro, ever since the country joined NATO on 5th June 2017, thus demonstrating its ties to Europe.

As for Serbia, the country maintains relations with Russia, without sacrificing its wish to join the EU, despite Russia’s unflinching intention to prevent exactly that.

Torn between Russia and Europe, especially due to Russian influence on the economy, Bulgaria is backed into a corner when facing Russia. According to the Bulgarian daily newspaper “24 Chasa”, “Borissov is divided on the issue of sanctions against Russia. On the one hand he rejects them, and on the other he resolutely supports the position of the EU. Furthermore, the Bulgarian President Roumen Radev invited his counterpart, Vladimir Putin, to come to Bulgaria on a State visit, which could be another difficulty for Borissov…It would be difficult to please both Putin, and his own coalition partners in Brussels. Any decision could trigger a governmental crisis.

These open Eastern influences could easily compromise the European integration of some Western Balkan states, in which a climate of ethnic demands could be dangerous. As for Bulgaria, the following months will prove decisive for the European politics in which the country wishes to engage.