“Eight minutes, it’s nothing, right? Such a small amount of time, and yet so long. Eight short minutes. You ever tried holding your breath for eight minutes? You couldn’t. George Floyd, with his face down on the ground, couldn’t do it either. Eight long minutes. First minute. Handcuffed, belly down, face flat against the pavement. Second minute. George can feel the full weight of the policeman slowly crushing him. George struggles in vain, tries to scream, begs. “I can’t breathe,” he says. Third minute. The police officer has now placed his knee on George’s neck. His face betrays nothing. George begs. And like a terrified child, he calls for his mother. Mama. Passers-by witness the scene. They’re filming, begging the uniform to stop. They dare not intervene. Fourth minute. Then fifth, sixth, seventh. The policeman doesn’t move. And George is slowly dying. In front of the cameras, as the others, unable to do a thing, watch the scene unfold… His screaming comes to a stop, his eyes become empty. George is dying. Choked by the American power. Eight minutes. That’s what a black man’s life is worth these days. His name was George Floyd and he was murdered. Make America Great Again.” – Vincent Lahouze

George Floyd, a 46-year-old black man, died on May 25, 2020, following his arrest by the police. During said arrest, a police officer pinned him to the ground, holding him down with his knee for several minutes. This knee-to-neck move is very controversial as it is very dangerous. It is even banned in two cities in the United States: New York and Los Angeles. Despite the fact that George Floyd protested several times that he could not breathe, the officer held his knee on the victim’s neck for about eight minutes. Thus resulting in George Floyd’s dying from asphyxiation.

Video of the arrest (warning, the following images can be disturbing)

The four white officers involved in George Floyd’s arrest were fired. Derek Chauvin, the officer who held his knee to the victim’s neck, was charged with manslaughter. He has also been the subject of 18 internal complaints, but these did not give rise to any penalty.

George Floyd’s family wants the men involved in his death to stand trial for murder. They accuse the police of racism. “I would like for those officers to be charged with murder because that’s exactly what they did. They murdered my brother,” Bridgett Floyd, George Floyd’s sister, told NBC. The attorney representing George Floyd’s family, Benjamin Crump, denounced the “abusive, excessive, and inhumane use of force” for a “non-violent” charge, and called for the end to “the racial profiling and undervaluing of black lives by police”.

According to the police, George Floyd attempted to use counterfeit bills, and apparently resisted arrest. A police spokesperson even claimed that George Floyd appeared to be drunk or drugged. But the police gave false information, as images filmed by passers-by show that George Floyd was not resisting arrest. Therefore, he was not subjected to regular arrest procedures.

Following the death of George Floyd, protests erupted all over the country. Some of them degenerated into violence, as some demonstrators broke windows and set the Minneapolis police station on fire. Police officers shot tear gas, but also rubber bullets to drive them away. Some looting also occurred, and one man was shot dead. As a result, the mayor declared a state of emergency, and the governor authorized full mobilization of the National Guard in Minneapolis.

The President of the United States, Donald Trump, in reaction to the third night of riots, tweeted: “when the looting starts, the shooting starts. Thank you!” The social network Twitter has hidden his tweet, saying it violated rules about glorifying violence.

France24’s report on the demonstrations

In addition, militant movements have mobilized. It is the case, for example, of the “Black Lives Matter” movement, which was launched on Twitter on July 13, 2013, after the acquittal of the murderer of a black teenager, Trayvon Martin, in Florida.
Many celebrities, such as Lebron James, Cardi B or Kim Kardashian, also shared their indignation on social networks. Black Senator Kamala Harris said the arrest was an act of “torture” and a “public execution” in a society dominated by racism. Joe Biden, the democratic candidate for the presidential election, said: “It is a tragic reminder that this is not an isolated incident, but is part of a cycle of systematic injustice that still exists in our country.”

Lebron James’s tweet in reaction to the death of George Floyd (on the right is the picture of Colin Kaepernick, an American football player who, during the 2016 season, knelt during the US national anthem to protest against racism in the US and police violence against minorities)

But outrage over George Floyd’s fate was not limited to the United States. Quite the contrary. It spread to the entire world thanks to the hashtag “#JusticeForFloyd” that went viral and to the spreading of images of the arrest.
Racially motivated police violence, a common phenomenon in the US.

Sadly, George Floyd is not a unique case in the United States. Police violence against minorities is frequent in the country. For instance, the black community represents about 13% of the population, yet accounts for 26% of the victims killed by the police. In 2019, a study conducted by the US National Academy of Sciences revealed that 1 in every 1,000 black men can expect to be killed by the police in the United States. This probability is 2.5 times higher than for white men. As for black women, the study reports that they are about 1.4 times more likely to be killed. If it is true that police violence affects all minorities, not just African Americans, they remain the most concerned by these phenomena of violence. 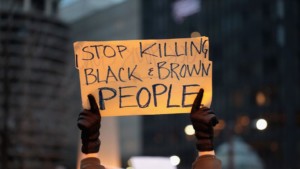 Protester in Chicago on April 2, 2018, demonstrating against the killings of black people by the American police (Credits: L’Express)

Many cases have broken out in recent years. But one of them in particular perfectly illustrates the injustice of police violence against minorities and proves how little the situation has changed in the past years: the death of Eric Garner. On July 17, 2014, Eric Garner, a 44-year-old black American, was questioned by the New York police about his illegal selling of cigarettes. During the discussion, police officers ask him to put his hands behind his back. As he refuses to do so, they put him in a chokehold, a method that has been banned in New York since 1993. Eric Garner repeats several times that he cannot breathe. He ends up losing consciousness and is later pronounced dead in the hospital. The arrest was filmed by a witness on the street. The video was widely circulated on the Internet and aroused outrage. The Garner family received $5.9 million in compensation, and the officer responsible for causing Eric Garner’s death was terminated from the Police Department.

The similarity between this case and George Floyd’s is striking, both in the way the arrest was carried out and in the outrage it aroused. George Floyd also said the exact same words as Eric Garner: “I can’t breathe”. This sentence, which has now become a symbol of police violence against minorities, was regularly used in the demonstrations following the deaths of these two men. The similarities between the two stories show that police violence against minorities is not improving. Quite the contrary, as since 2017 there has been a significant increase in racially charged crimes in general throughout the United States. We can only hope that the outrage over George Floyd’s death will lead to concrete measures to fight this societal issue.

The Universal Nature of Police Violence Against Minorities

The United States does not have a monopoly on racist police violence. Quite the opposite. Many countries are concerned by such discrimination.

In 2018, Portugal was shaken by a case in which 17 police officers were accused of torturing six people of African origin. The State tried to ignore these allegations. It’s only thanks to associations that light was shed on this case. Portugal is accused by many associations of concealing racist and xenophobic police violence, particularly violence perpetrated against gypsies.
In 2019, demonstrations also took place in Israel to denounce police violence against Ethiopian Jews, following the death of one of them in a police arrest. In general, Israel experiences latent racism against disadvantaged communities.

France is also struggling nowadays with racism-related problems within the police force. Throughout the country, the risks of being submitted to a police check are 20 times higher for a non-white person. The Adama Traoré case is a perfect illustration. In 2017, another young man of Malian origin was arrested, handcuffed, and taken to the police station. During the trip, he was pinned against a space heater which resulted in severe burns, and he had to undergo a skin graft. The 2017 report of the Association of Christians for the Abolition of Torture (ACAT) states that “over the last five years, there has been an average of one death per month” related to police interventions on non-white people. And yet, the police officers involved in such cases are rarely convicted. 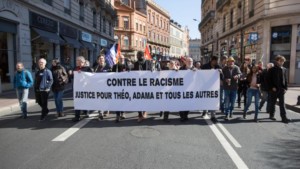 Demonstration ‘for justice and dignity’ against police violence in Paris (credits: Franceinfo)

In China, police violence against the black community has increased in recent years. Racism is also very present in that country. The police violence that is already common in this state is even worse against black people. Torture is also common.
Russia is also known for the many abuses perpetrated by police forces. In 2019, there were several demonstrations against the government and injustice. In every single one of them, people were beaten up. The number of racist crimes in Russia is also high, as there is an extremely strong anti-black racism, often led by Russian ultranationalists.

To conclude, racism and police violence are intrinsically linked, as well as universal phenomena since they exist everywhere in the world. Many communities are victims of racism. And with the rise of extremism around the world, racism is increasing. Racially motivated police violence is not immune to this increase. Action is therefore needed to help these communities avoid discrimination and to instil respect and tolerance in the younger generations.