As the reboot of the famous animated film Mulan, produced in 1998 by Disney Animation Studios, is about to be released on streaming platforms, the expensive blockbuster, with a total budget of $200 million, is facing numerous calls for boycott. Indeed, since last year, controversies have been piling up and just seem to never stop.

The legend of Hua Mulan takes place in the 13th century during medieval China and the Song Dynasty and is told in a poem called The Ballad of Mulan. The versions put into writings narrate, with a few variations, the story of a young woman who disguises herself as a man to be able to enlist in the army, thus replacing her old father in battle. The young woman then turns out to be an outstanding warrior and returns to her home village covered in glory. Many years go by before the truth about her sex is discovered. From there, pretty much everyone knows Disney’s musical and animated adaptation released in 1998, with the pretty warrior Mulan, Mushu the traditional pet, and the brave Captain Shang. In their desire to adapt their animated films, such as Cinderella (2015), Beauty and the Beast (2017) or The Lion King (2019), into live-action remakes, Disney Studios has decided to do the same with Mulan. This task was entrusted to New Zealand director Niki Caro. There is no doubt that this reboot could have been a success, with its real epic potential against a backdrop of romance and the feminist values conveyed by the story. But no one could have foreseen the pro-democracy marches in Hong Kong, the Chinese government’s repression of the Uighur people, or the economic constraints resulting from the coronavirus crisis and affecting the entire entertainment industry.

But how have all these events, like a black cloud, tarnished the movie’s media coverage?

People had great expectations for Mulan’s reboot and its directing. As soon as the project was announced, the public wanted the movie to convey important values. At a time when the Hollywood industry is often accused of whitewashing (the act of having white actors or actresses play the roles of characters who are not white), an online petition was launched. Entitled “Tell Disney You Don’t Want a Whitewashed Mulan!”, it received more than 100,000 signatures. It was finally the Chinese-American actress Liu Yifei who was officially cast in November 2017 to play the role of the Chinese warrior – a wise decision, or so it seemed at the time. However, as the film was scheduled for release in 2020, protests began. The reason why? A message posted by Liu Yifei on Weibo (a Chinese social network on which the actress counts 65 million followers) on August 14, 2019:

“I support the Hong Kong police. You can all attack me now. What a shame for Hong Kong.” 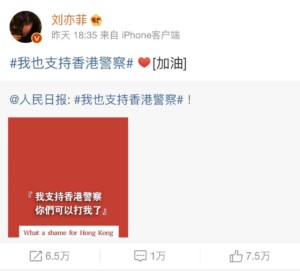 Indeed, since March 2019, violent demonstrations have been taking place in Hong Kong against the Hong Kong government’s amendment of the extradition law. The activists are demanding that the extradition amendment be suspended, because they see it as an opportunity for mainland China – which has been known for its sometimes liberticidal tendencies – to intervene in Hong Kong’s independent legal system. To put it in a nutshell, Hong Kong protesters are fiercely fighting to save the few legal privileges they have. Yet, although the marches were meant to be peaceful, the police used tear gas, bullets and bean bags to disperse the demonstrators. In the face of the government’s violent reaction, of the brutality, and of numerous unjustified police arrests, the activists decided not to abandon their cause. The revolt gained momentum and there was an escalation of violence on both sides.

In this context, the actress’s online statement gave rise to the hashtag #BoycottMulan, shortly followed by #BanMulan. On Twitter, Internet users accused Liu Yifei of being the worst possible figure to embody the Chinese legend.

If Mulan fought in the 13th century to prevent her father from dying in the war, the character today symbolizes much more than just a set of family values. Indeed, after having criticized the words of the actress chosen for the movie, the Twitter community didn’t stop there, and made its own cast. When typing the hashtag #TheRealMulan, one comes across Agnes Chow’s face. As a young 23-year-old student, Agnes Chow joined the student movement “Scholarism” in 2012 and became its spokesperson. The group was originally created to prevent the introduction of moral and national education classes at school. True to her militant commitment, Agnes Chow then created with a few comrades the party “Demosistō”, which literally means “defending democracy”. The young woman did not stop there, since she ran for the parliamentary elections in Hong Kong in 2018. Even after her failure caused by the Chinese government’s refusal to validate her candidacy, Agnes Chow didn’t stop either. She was arrested once on August 30, 2019 for participating in marches, then a second time on August 10, 2020 for inciting secession under the National Security Law. It thus appears that the face of the modern Chinese hero is that of a woman, and that she no longer fights against the army of an unknown kingdom, but against police repression to defend human rights, the values of the people and democracy. She rallies behind her the Hong Kong activists, as well as a large part of the international community, and seems to bring down Hollywood industry and the defenders of Beijing politics. 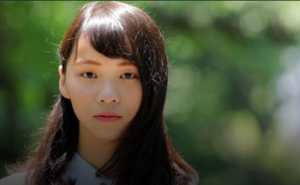 Since September, calls for boycott, initiated by pro-democracy activist Joshua Wong among other people, have resumed tirelessly on social networks, especially in China, Thailand and Taiwan. Activists from the three nations have joined forces to defend a common cause under the hashtag #MilkTeaAlliance. After having had to postponed its release date many times because of the Coronavirus, the film became finally available on September 4, 2020 in the US and part of the world on the Disney+ streaming platform. The fact that to watch it, one must pay something in addition to the initial subscription fee, hasn’t gone unnoticed. It will be possible to watch it normally from December 4, 2020. In China – where the Disney+ platform is not available – the film was released in theaters on September 11, and again, reproaches followed up. In the movie’s credits, Disney offers a special thanks to the Communist Party propaganda departments of the Xinjiang Autonomous Region, that of the city of Tourfan, as well as to its Public Security Bureau – thus thanks to the propaganda and police departments. It is true that the Xinjiang territory is the perfect spot for filming movies with its mountainous and desert landscapes, and many a movie has been shot there (including Mulan). However, it is also the very place where unacceptable attacks have been committed against the Uygur people. The region of Xinjiang is, indeed, none other than the one where the Chinese government has built concentration camps for Uighurs. At a time when the international community is only just beginning to break the silence about what is really going on in these camps, and to recognize the serious violations committed in this territory, these special thanks in the credits shocked the public who have rebelled against such choices.

Finally, the public opinion deplores the script decisions made by Disney or the choice of faces of a few characters (some might say that Mulan’s father bears a strange resemblance to Xi Jinping, the current Chinese president). It is a shame, for instance, that Li Chang, the character who falls in love with Mulan while he thinks she is a man, was cut out of the script. In the reboot, one of the characters who replaces Li Chang develops a friendlier relationship with Mulan, which is regretted by the LGBT community, who considered their relationship an example of bisexuality illustrated on screen.

As for Joshua Wong, he accused Disney of bowing down before Beijing by releasing the film in Chinese theaters. It is indeed well known that China keeps a very tight control over the flow of information and the entertainment content on its territory. Movies that appear on the big screen are usually filtered and censored. If the government deems a movie acceptable, it is because it complies with a certain number of requirements that are akin to propaganda – a propaganda that Disney Studios is now accused of being accomplices. With their reboot, Disney seems to remind us that we have grown up and live in a world where magic and innocence fly away like butterflies. 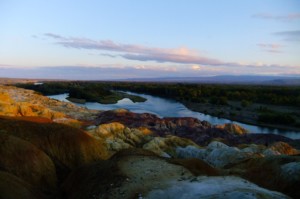 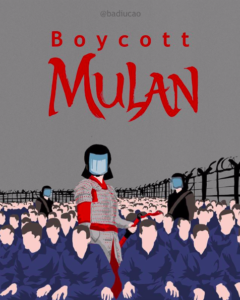 The beautiful landscape of Xinjiang, where all the crimes are commited

Mulan represented as a guard, to denounce Disney’s support to the Government

Badiucao, an artist hated by the chinese government for his satyrical work: https://www.instagram.com/badiucao/