Over the years, Syria has been dominated by Persians, Greeks, Romans, Byzantines, and Arabs, to name a few. The first traces of agriculture and livestock farming were found there, as well as the first alphabet. Syria has always been a crossroads of cultures, and the country’s historic legacy reflects a millennia of civilisations. Now, from looting to terrorist financing, Le Journal International investigates “blood antiquities.”

As a source of immense archaeological wealth, Syrian heritage has become an economic resource for looters. In 2011, when the Syrian civil war began, looting gained momentum. Whilst already having caused 300,000 deaths and forced 50% of the population into displacement, the conflict has also been a catastrophe for Syria’s rich cultural legacy.

The cradle and tomb of civilisation

Much of Palmyra is lost, says expert. IS destroyed Arc de Triomphe (L) and Temple of Bel (R) https://t.co/FMEbfwgbIS pic.twitter.com/xVxpdqifH7

Well known world monuments, such as the Monumental Arch of Palmyra or the Lion of Al-lāt, were completely destroyed. Others were severely damaged, like the Roman Theatre at Bosra. Russian bombings in Aleppo obliterated the city’s citadel, wiped out its souk, and shattered a part of the Great Mosque of Aleppo.

In addition to the bombings and confrontations on the ground, another type of destruction has taken off in Syria—looting. Jesse Casana, a specialist in Middle Eastern archaeology at Dartmouth, says more than 3,000 of the country’s 15,000 great archeological sites have been looted since the beginning of the war. This unprecedented rise in looting poses a direct threat to the region’s archeological heritage.

For Mr Casana, the obvious goal is to find out who is profiting from this looting. Who are these “war dogs” taking advantage of the war? In a satellite imagery-based analysis, the researcher reveals some surprising results. Contrary to popular opinion, Islamic State is not the only guilty party. 21.4% of IS-occupied sites are looted. This statistic rises to 26.6% for sites occupied by anti-regime groups, and 27.6% for sites occupied by Kurds. IS sites are, however, characterised by intense looting. Of IS-occupied sites, 42% are considered to be massively looted, compared to 23% in zones controlled by Al-Assad, 14% in anti-regime zones, and 9% in Kurdish zones. Adversary or ally, everyone seems to agree on one thing: the ends justify the means. 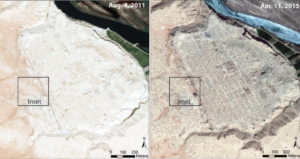 These numbers have seen recent growth. According to Christophe Menech, director of the Archéorient research centre in Lyon, looting has always existed in Syria, but the war has sparked acceleration. The country is in chaos, and “the borders are becoming porous,” says Mr Benech, who lived in Syria until 2011.

After prohibiting looting, IS later realized the potential economic gain in the activity and began supervising it. The terrorist organisation started to tax up to 20%. Mr Benech explains that in mid 2014, IS took over the movement, developing its own team of looters. Real “industrial looting” was taking place. Since then, looting has become one of the organisation’s principal resources, alongside gasoline and kidnapping. For Mr Benech, it’s as much of a loss for Syria’s legacy as it is for science. No matter what stance you take, one fundamental and even ethical question remains: who’s buying Syrian relics?

From Syria to London

Paradoxical as it may be, the majority of antiquities looted and exported from Syria wind up in Europe and the United States. To accomplish such a trade, IS locates strategic intermediary points between Syria and Europe. Smugglers for IS then bring their merchandise into cities like Beirut or into Southern Turkey. The objective is to find an intersection between the Middle East and Europe, where the Schengen Zone largely facilitates circulation. American archaeologist, Christos Tsirogiannis, claims that metropolises like Geneva, Basel, Zurich, London, or even New York are particularly present in the trade of looted antiquities. The change of ownership, the back-and-forth between seller and restorers, and the absence of papers certifying the object’s origins make for quite a shady market.

Saying “Europe is financing IS,” is going too far, says Mr Benech. Still, the looting of “blood antiquities” raises issues of morality and responsibility. It would seem that humanity stops where the lure of economic gain begins.