Skateboarding from California to Berlin, interview with Martel Persien

In the movie, This Ain’t California, the German skateboarder and movie director, Martel Persien traces the evolution of skateboarding in the former German Democratic Republic. Considered as a tool for political protest in East Germany, or a distinctive discipline of the American dream… skateboarding led to radical societal changes in Berlin. So, an analysis. 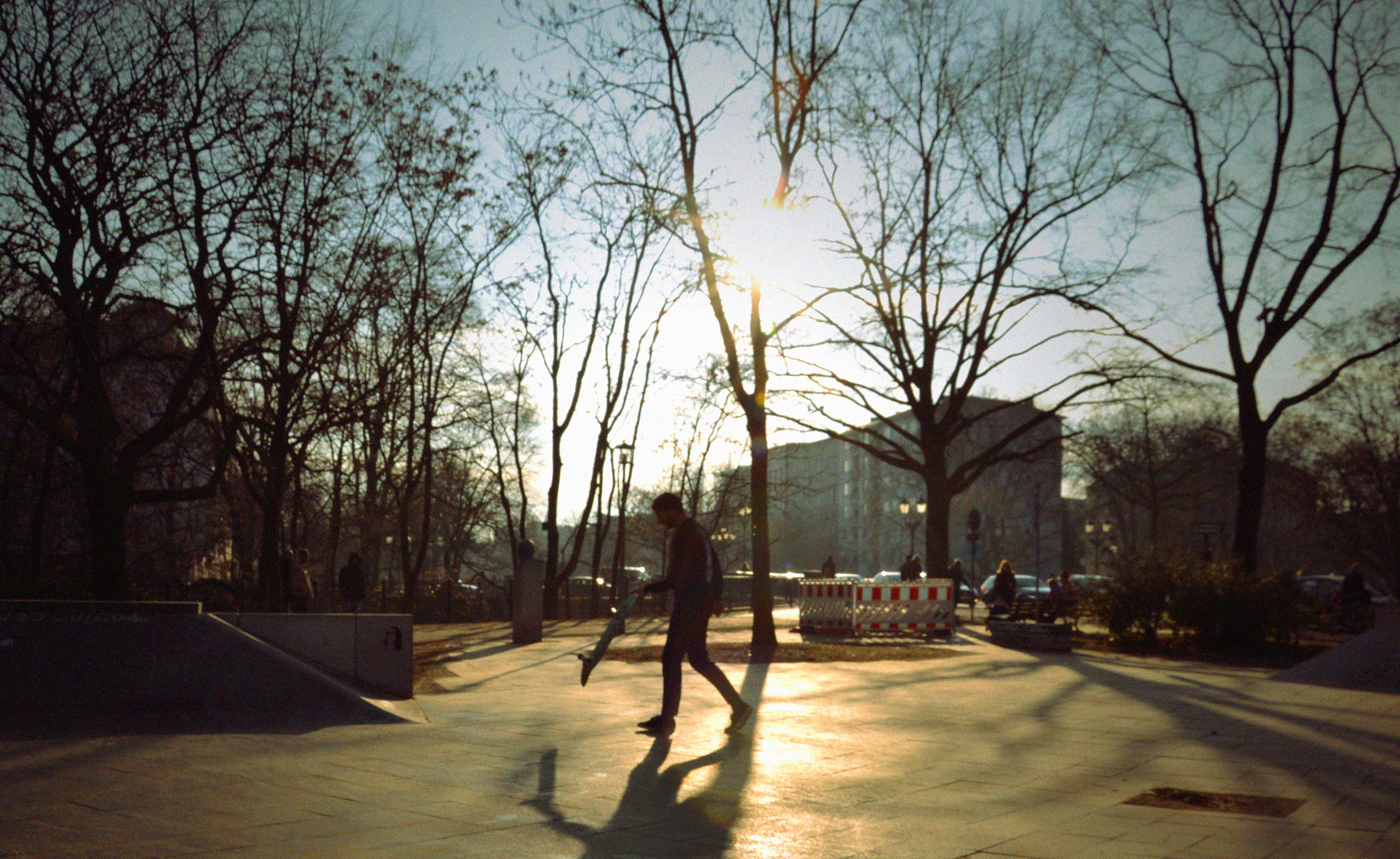 Firstly named “roll surf”, and a direct descendant of the surfboard, the skateboard was born in California at the end of the 1950’s. Homemade, the long board was assembled with recycled products due to a lack of materials. This decreased its development outside California. In 1973, Frank Nasworthy created the urethane wheel. This radically changed the way of designing and grasping the discipline of skateboarding. The sport popularised and became a commercial success worldwide. 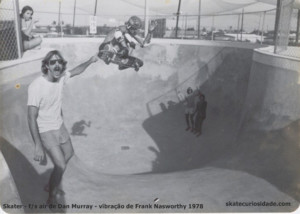 West Berlin under a Californian influence

Skateboarding was a showcase of the American dream. It expanded its influence not only to young Californians but to the whole world. But, this progression was halted in Eastern Europe by the Soviet Union, which saw a political contestation of the regime. This bipolarization of cultural trends was formalized in 1961. With the construction of the Berlin wall, the divided city then opposed two antithetical cultural dynamics.

In the 1980’s, the cultural landscape of the British, French and American parts of the city were marked by artists from all over the world. During an interview for Le Journal International, the main protagonist of B-Movie Lust & Sound, talks about the different levels of the alternative culture of the time. The increasing number of artistic squats in the city revealed the will to challenge the traditional ways. Among them were The Tachelès , the emerging and incontrollable electronic music scene, and even street art. Every production was then recognized in the world of art. The new access to drugs, brought by American soldiers and fully prohibited in the East, created a new link to the art, which was gradually associated to the emerging electronic music scene. The west part did not escape the Californian influence of the 1950’s. But it did not reach the East until 30 years later. 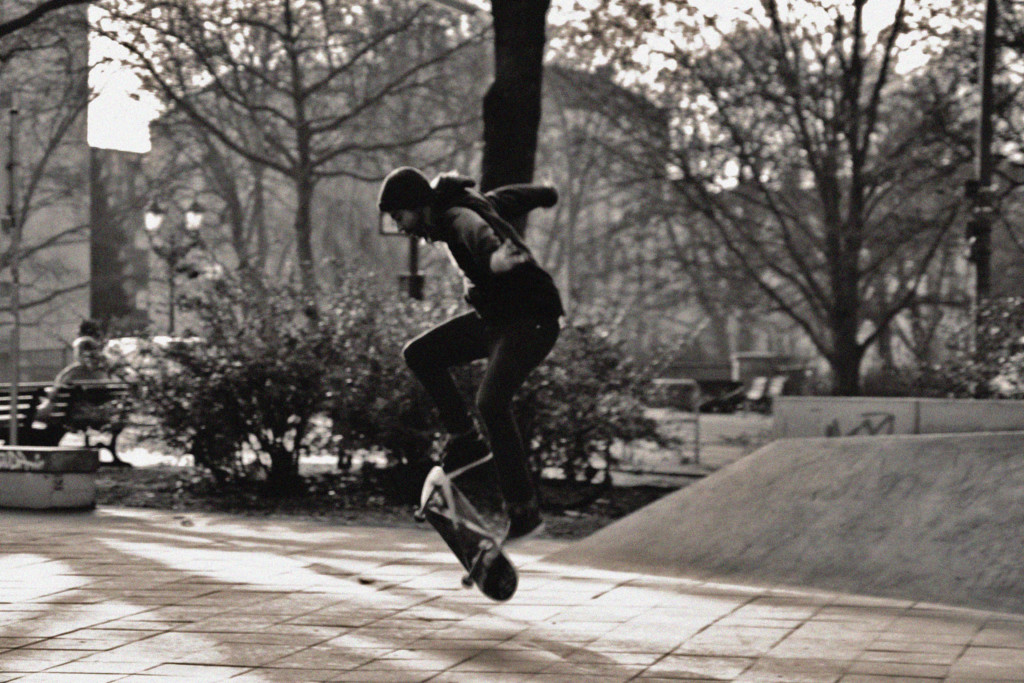 The East, was not California

In East Berlin, skateboarding had a negative connotation to the communist regime, leading to its prohibition. The movie director Martel Persien, a former skateboarder, is interested in the gap between the connotations of skateboarding: “rebel” in GDR and “mediated” in FRG. He grew up in the West, where the skateboarding culture drew its inspiration from the punk scene and the United States. After that, he travelled abroad: England, Brazil, the Philippines… In 2011, he finally came back to Berlin and started a movie project on the skateboarding sphere in ex-GDR. This Ain’t California.

During an interview, Martel Persien explains to Le Journal International: “After all, when I did the movie, I had the same look as a foreigner, rediscovering the History. I knew at my fingertips the skateboarding world in the West. But after some research, I understood it was really different in GDR, skateboarding was more a counter culture act. It was the demonstration of freedom and of the disenchant of the system, like an escape for the young people”.

Eastern Berliners were isolated, they couldn’t shoot movies in Super 8, and Tv shows were regulated. “Skateboarding was a way of entertainment for the isolated teenagers of the American fashion and consumer market. The boards were assembled, it wasn’t a question of social backgrounds, they just didn’t have the proper materials. The East was 30 years behind the United States” the movie director adds. This Ain’t California was released in 2012, and was considered as one of the first documentaries to develop this gap between the two blocs and gave a movie identity to what was built outside any representation. 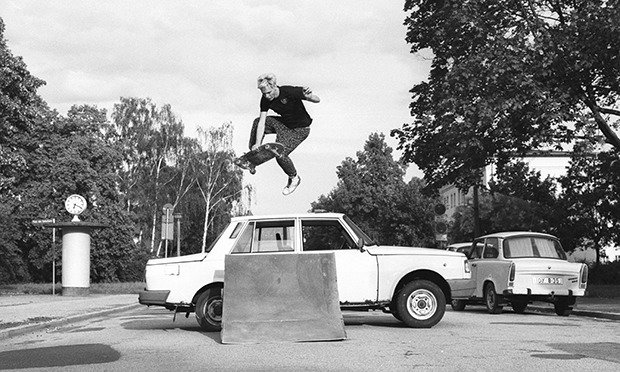 To counterbalance the gap, the GDR claimed cultural uniformity and implemented propaganda. Sports and artistic performances were subject to state investigation. The emerging alternative cultures were not marked by the increasing artistic possibilities, but by a withdrawal from the external artistic codes and their own constraint to the regime. “When skateboarders such as Goofy, René Thomasius or Marco Sladen, who feature in my movie, were riding the Karl Marx alley or Alexanderplatz on their homemade boards, they were seen as a perversion of the traditional manners and of the public order”, declares Mr Persien.

The movie deals with the excursions to the East. Alongside DJs, some skateboarders directly addressed young people and converted them to skateboarding. It became an art in its own. In the same way as break dancing, or the punk movement, it gathered young people. The Eastern TV programs compared it to an illness.

“Like a virus, it is spreading in the city, creator of immorality and scepticism, it is urgent to protect our children from it » – extract of the DDR archives, This Ain’t California.

“On one side of the wall, they wanted to legalize the movement while on the other side they controlled the skaters” remembers the filmmaker. It went even to the point where records were found from the Secret Service in GDR that stated people were practising “unorganized wheeled sports”. The claimed objective was to give a “direction” to the sport. 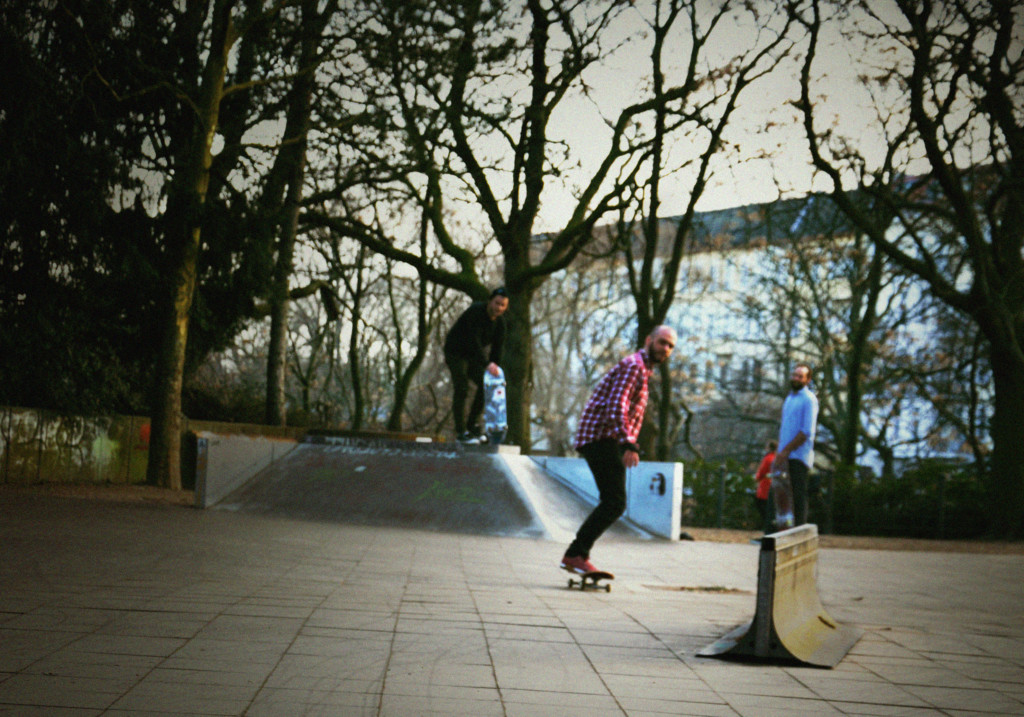 The skateboarding community recognised in 2017

At the German reunification, the cultural fragmentation began to disappeared. In the wake of its American influence, skateboarding became accessible. It gradually found a place in the common culture and was not claimed to “pervert traditions” anymore. The esthetical and technical codes were seen for skateboarders as an infinite form of expression, which Mr Persien describes to be “between dancing and sport”.

At the Blöcker Park, a skate part in Freuzberg, Berlin, Le Journal International met two skaters. Sergio and Antoine have accepted to share their experience of the skate community in 2017. Antoine, an amateur since he is aged 6, analyses its historical evolution.

“Skateboarding created its own community, now fully integrated which does not have the same ‘underground’ in the sense of rebel connotation it used to have. Skateboarding has had different periods: in the 1980’s, it was about combining speed and performance. Then, during the 1990’s it became more technical, “street”, while before we were only exploring simple figures. Many brands and new figures are created and broadcasted by videos made by precursors of the link created by the internet. In the 2010’s, there was a break in the sport followed by a new regeneration in the sport with new styles. It has become something more artistic. The media over-accessibility and the social networks have help to seduce more people to the discipline.”

Democratisation of the discipline

Sergio explains to us that the libertarian connotation remains, enriched by “tricks”, the new shape of boards. The technical progress draws new movement: “retro old school style”, “crashers”, “technical”, “creatives”. Independent of technical progress, the two trends persist in relation to the classification of the sport. The first one preserves the symbolism of an alternative movement, intimately linked with the punk scene and break dancing. The other scene tends to make it a sport of the common culture, with the recent controversy dividing the community around the entry of the discipline at the Olympic Games among others. 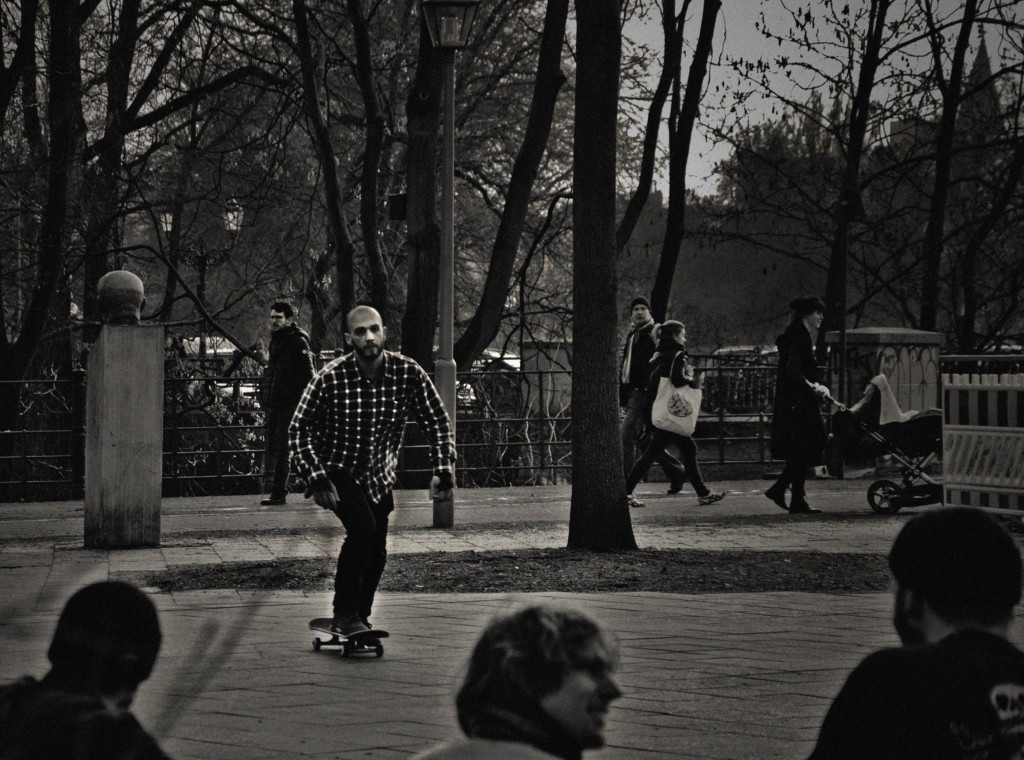 Firstly, a successor of the surfboard, it has become a recognized discipline on its own with its own technics, celebrities, and sports, the skate movement was born as a sport, as an art or as a libertarian interface. Boycotted in the East, and omni-present in the West at the time of divided Germany, it gathered the two parts at the fall of the wall with its institutionalisation. Today, sport competitions are multiplying, the accessibility to the market is promoted by many sponsors, brands and public figures. The discipline has been democratised. This confirms the solidity of a community born approximately 70 years ago.