Following the terrorist attacks in Istanbul on January 12th 2016, the Journal International decided to cover the facts surrounding these events. With this in mind, we posed a series of questions on the issue to two French students; Loris, a 21-year-old Political Science student of Armenian descent, and Berevan, a 26-year-old of Kurdish origin, studying Literature, Language, Foreign Civilization and English. Both students agreed to an interview, in which they gave us their views on the current situation in Turkey.

Journal International: On January 12th, Istanbul was targeted by a suicide bomber, and Daesh have claimed responsibility for the attack. Turkey is often accused of supporting this organization; do you think that this is the case?
Loris: I don’t want to get carried away about this, because I don’t know what Erdoğan’s strategy is, but I don’t think that the two are necessarily linked. It is hard to truly believe in his fight against Daesh; it could even be argued that terrorist attacks on Erdoğan’s territory give him the opportunity to portray himself as the victim. This can clearly be seen when he claims to fight against all forms of terrorism, without making the distinction between the PKK (Kurdish Workers’ Party) and Daesh.
Berevan: Erdoğan is being beaten at his own game by trying to convince the entire world that he has absolutely no ties to Daesh. Now, there is a lot of evidence suggesting that the two are connected. He wanted to play both sides. By pushing for Turkey to join the European Union, he’s trying to appease the big world powers. But on the other hand, he has failed to intervene against the terrorists.
JI: Turkey has been attempting to join the EU since 1987. Considering the immense criticism leveled against Erdoğan’s policies, is Turkey entering the EU a desirable situation?
Berevan: Absolutely not! Turkey is a dictatorship, and so has absolutely no place in the European Union. I don’t think that Turkey reflects the core values of the EU, and so it shouldn’t be allowed to join.
Loris: I’m not actually opposed to it for geographical or historical reasons, but because I think that Europe would be making a big mistake by allowing Turkey to join the EU. It would require even more building and even more effort; it would destabilize European politics. It has often been said that the choices made regarding the integration of the EU would determine its global policy. The decision to incorporate Turkey could only be justified by temporary interests. Now, the EU already has problems related to its structure, and I think that it would be a bad thing for Europe to allow Turkey to join. And in terms of recent developments, no-one knows what this could imply in the long term. All of this requires a very profound reflection, and we don’t have the perspective to make a decision on this issue.
JI: Is it not important for Europe to maintain a special relationship with Turkey?
Berevan: Yes, there are certainly interests behind it, but I don’t think that they are well thought-out.
Loris: Allowing Turkey to join the EU is not a solution. There are plenty of agreements that have been made outside the Union, such as with Armenia and Georgia… and yet these countries were not integrated into the EU. In the case of Turkey, we can’t forget that the expansionist politics of Erdoğan are part of a dictatorship. These are imperialist politics, where the government is nostalgic for the power of the old Ottoman Empire. Perhaps EU membership would make it possible to stop Turkey’s expansionist goals, or perhaps it would reinforce their power instead. However, there are too many reasons to say no.
JI: In an interview with the Journal International, a Turkish teacher also claimed that Turkey, as “the most powerful country in the Middle East”, was the region’s most stable country, and that all other countries in the area were confronted by democratic, political and economic difficulties. Do you share this view of Turkey, and of the Middle East?
Loris: I don’t understand how anyone can say they support Erdoğan’s government today, or that Turkey is politically stable. Turkey is confronted with a major political crisis, and Erdoğan’s only solution is to seize more power over the population. We are on the verge of ethnic massacres, as was the case at the end of the 20th Century; not under a pretext of secularization, but of Islamification. For me, Turkey is not stable at all; it is in crisis. And as for the other point, there are other countries which have more influence in the Middle East.
JI: In the same interview, the Turkish teacher claimed that there is no difference between the PKK, who do not represent the Kurds, and Daesh. He also argues that the image Europeans have of the Kurdish situation is down to PKK propaganda. What are your opinions on these claims?
Loris: The problem with State debates which compare the PKK and Daesh is that the overall population makes no distinction between the two. Erdoğan merges everything by comparing the PKK and Daesh, so how is the population supposed to tell the difference between the Kurds and the PKK? The Turks close down all the Kurdish shops and businesses; there has been a real public lynching of ethnic minorities, such as Kurds and Armenians. It’s all very well for Erdoğan to say he would never fuel the hatred between these two populations (who are still indigenous), in reality it’s not the case, because the police don’t tend to intervene when Kurdish shops and people are violently attacked. 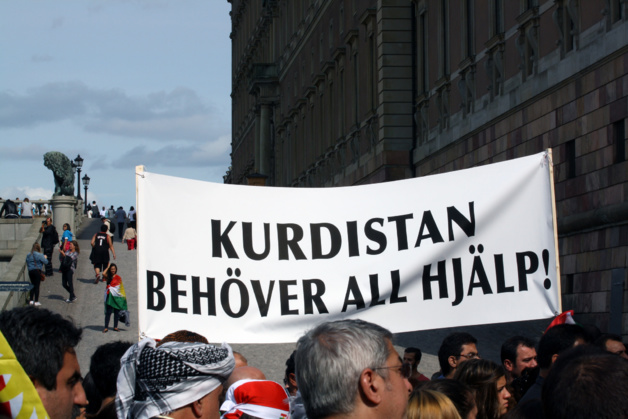 Berevan: Just because Kurds have shops in Turkey doesn’t mean that they are completely integrated into society. There are many Kurdish villages in the south of Turkey that face daily attacks, where curfews have been established. In some cases, Turkish police enter the homes of civilians to kill them. At the end of the day, I wouldn’t call that being “brothers and sisters”. And actually, when the leader of the pro-Kurdish party announced that he wanted peace between the Kurds and Turks, he was denounced as a “traitor” by the Turks. So I wouldn’t call that a stable government where minorities can live in peace. It’s propaganda. Erdoğan is the first to call the Kurds traitors and terrorists, and he’s also the first to fail to make the distinction between Kurds and Daesh. In fact, for everything he accuses the Kurds of doing, he is the one who does it.
JI: Can Turkey be called a stable and democratic country?
Berevan: Dictatorship, propaganda, and terrorism are all that come to mind when I think of Turkey at the moment.
Loris: I think that Turkey is confronted with a challenge; to reconcile its people. Instead of rising to this challenge, it’s resisting it. Turkey is nostalgic for a fallen Empire, and, as Berevan said, it’s full of the propaganda and the cult surrounding President Erdoğan. Everyone seems to be buying it, especially the Turkish Diaspora, who don’t realize what is really happening. But the leaders must take responsibility, in order to create unity among their people, instead of dividing them.