During the COVID-19 crisis, which is described as exceptional, expertise abounds. There are doctors, infectious disease specialists, epidemiologists, politicians, etc… But there are no, or little, human and social sciences on the horizon. Yet, this global pandemic provides a rich basis to reflect upon our modern societies.

Application of biopolitics: a perception and inequality indicator

Is the argumentative construct between protection and coercion?

What stands out is that the application of these politics “in the name of life” influence our daily life: wearing a mask, lockdown, using Zoom for remote work, social distancing, etc… Many researchers agree to say that we are currently in a textbook case of what Foucault described as applied biopolitics. He described this concept as power and knowledge processes that consider the processes of life by trying to change and control them. In other words, biopolitics is the internalization of biology in political decisions.

This application of biopolitics, “in the name of life”, puts forth that in times of a pandemic there is a sacralization of life. For the world-renowned Italian philosopher, Gorgio Agamben, we are rather putting forth a “survival” state. He is a specialist of the notions of “measures” and “command” and he said to Le Monde newspaper that “health has become a legal obligation to fulfil at any cost”. He is very critical of applied biopolitics and thinks it is legitimizing a “state of emergency”.

He believes that “in the face of terrorism we claimed that we had to suppress freedom to defend it, similarly we are told that we must halt life in order to protect it”. This statement reveals a fracture in the hierarchy of preoccupations during this pandemic. For states, this is about protecting biological life, whereas for the sociologist we must handle “social” life carefully. For him, the state of emergency has become the norm, imprisoning us in a climate of fear and insecurity. In this regard, the NGO Amnesty International had already spoken out against the management of terrorist attacks in Europe. The state of emergency was seen as a means of coercion since it was renewed numerous times, including in France between 2015 and 2017. When it comes to the fight against the health crisis, the NGO did not fail to recall that this state of emergency can lead to authoritarian excesses. The third edition of the Global Democracy Index published by The Economist newspaper found that there is a decline of democracies in 70% of the world’s countries. This study puts forward a decline of individual freedoms in “advanced” democracies.

There is a heated controversy opposing two perceptions: a regime that uses means to protect its citizens or, on the contrary, one that abuses its authority.

Another interesting feature is that biopower exercised during the pandemic highlights the inequalities and vulnerabilities of some citizens (entertainment workers, restaurant owners, students, etc…). The class struggle seems to have been approved with modernization and the growth of technology. However, the implementation of health measures reveals a disparity in the consequences that a portion of the population is experiencing.

Theoretically, the risk of contracting the virus is the same for all members of the population. Nevertheless, it is clear that unprivileged populations expose themselves to greater risk. For example, being in a large family and sharing a small apartment increases the risk of contracting the infection. Furthermore, we often forget that to make the war effort of lockdown, we need workers behind the scenes who run a greater risk than the rest of the population in lockdown. Ultimately, it appears that this crisis highlights an economic caesura, even if all the factors are not clear yet.

Is the health crisis a prism for the mutation towards the environmental crisis?

The application of biopolitics is also reflected in a change in the perception of risk. In fact, lockdown is used to set aside contagion agents (the people) because they can risk (negative hazard) transmitting the disease. Let us hope that this focus on contagion agents does not hide other issues that are maybe even more important, for instance, those linked to our consumption society. For the sociologist Bruno Latour, this health crisis would allow us to prepare ourselves for climate change. He questioned the evidence that is given to the protection of life in an article where he very strongly criticized the application of biopolitics in the health crisis. In a way, he wonders why states can so “easily” put in place biopolitical measures, whereas they are slow at structuring our lives for the environmental crisis.

The health crisis is certainly immediate, playing with this proximity and temporal bias, but we also know that the environmental crisis will scar our societies. There is, so to speak, an underestimation of the environmental crisis even though the emergence of infectious diseases in the world, mainly the zoonoses (pathogens carried by wild animals), are related to anthropic activities. However, this underestimation is not really surprising since it has been known for a long time in sociology. The environmental crisis is more prominent in the minds of social players through the prism of the health crisis. Perhaps, this is how the current crisis will allow a shift to the climate crisis.

The risk concept, in other words, the probability of occurrence of a negative hazard, was theorized by Ulrich Beck in “La Société du risque”. He explained that our current society creates risk, on one hand through its technologies, and on the other hand through its perception of that same risk. Thus, a risk is only considered as such when the population perceives it as such. For him, these risks are threats that we do not perceive with our senses. They are invisible, like pollution or viruses. He also explained that they are often external things of human production. In a previous article, we tried to show that the constant increase in infectious diseases in the world is related to anthropic activities. To the point where researchers explain that this increase is “the hidden cost of human economic production”.

We can then see in the application of biopolitics an internalization of the risk concept. Lockdown or social distancing are used to manage the (biological) health risk of contagion. These biopolitical measures are an application of the prevention principle which is used to manage risks by trying to reduce their occurrence probability. If sometimes crisis management is considered to be risky, it should, however, be taken into account that risk management is above all an uncertainty management. It is only by accumulating data that one can have a more global view.

It should also be noted that there are many competing risks. Thus, individuals rank the different risks to which they are exposed. The sociological researcher, Patrick Peretti-Watel, explained that some people are ready to expose themselves to the risk of being contaminated by refusing the application of biopolitics. This comes to show that for these people there are risks that they judge to be higher than the health crisis. Patrick Peretti-Watel said that “the health risk that authorities are trying to manage is not necessarily a priority for everyone”. In this regard, it can be observed that protests against biopolitical measures arise everywhere in Europe. In Austria, Belgium or Denmark, protests in opposition to anti-COVID-19 measures have taken place. This illustrates that risk ranking is not the same for all individuals and that it depends on the perception of different risks. For these people, the risk of losing their job, of solitude or a lack of social connection are greater risks than the health crisis risk. The fact that they are demonstrating shows that there is a disconnect between a population’s risk perception and the risk perception imposed by the state. This is a thorny issue for the state which must not only manage the health risk but also the risks perceived by its population.

The lockdown, by creating social distancing, reminds us that we are all carriers of contagion. It is a way of emphasizing individual responsibility which is very often put forward in health campaigns. Another interpretation shows that the lockdown shifts the risk to others, which tends to make the consequences of our modernity invisible.

Fear as a driver of engagement?

The essence of the application of this biopolitics is fear. It is specifically this fear of risk and of its hazards take makes us internalize the governance of the biological body in political decisions, leading ultimately to biopolitics. Here, philosophy offers several interpretations. For instance, for the philosopher Roland Barthe, fear is a positively mobilizing affect. It is a mechanism that allows us to stay alert thanks to the principle of prevention. It stipulates that one must be careful when there is uncertainty. What could prevent it is the fear of potential risk. In this regard, fear of negative hazards becomes the driving force behind anti-COVID-19 reforms.

For other philosophers, fear is simply a bad advisor. It is difficult to make a final decision on this matter as it depends on the perception of each individual. What is undeniable is that fear upsets our certainties and influences our actions, for better or for worse.

The health crisis stresses our moral obligation to future generations

How can we talk about fear without mentioning the specialist in this field: the German philosopher Hans Jonas? In short, he explains that we must scare people in order to live. In this respect, he shares Roland Barthes’ approach. His novelty is that he developed the “ethics of the future” by questioning the impact of modern techniques. To do so, he developed the principle of responsibility that questions the heritage that we want to pass on to future generations.

Like Ulrich Beck, he explains that science creates uncertainty or risks. On one hand, it is the driving force of modernity, while on the other hand, it is its main source. For instance, this is what can be observed in the vaccination controversy. The vaccine against COVID-19 is described as technological and scientific progress, while a portion of the population thinks that the risks associated with the vaccine have not yet been sufficiently assessed. To solve this paradox, it would be necessary to invest in science that analyzes the risks of its own progress. In other words, it is necessary to promote a kind of reflexive modernity that doubts and questions itself constantly.

If we consider that the health crisis is also an environmental crisis because it highlights the failure of the current economic system, the overlap of Ulrich Beck’s risk society and Han Jonas’ approach allow us to understand that it is not only necessary to invest in modernity with immediate effects but also to evaluate them. The integration of future generations in the cost and benefits calculation of our modernity confirms that we must project ourselves in a longer timeframe.

Even though Hans Jonas’ theory is often ineffective in practice, the concepts that we have just seen can be schematically explained with an infographic. 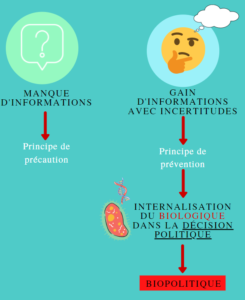 The current health crisis is a rich subject to reflect upon. To use the expression of one of the founders of anthropology, Marcel Mauss (1872-1950), we are facing a “total social phenomenon” as the fields involved are diverse and varied. Human and social sciences offer a new interpretation of this crisis. They highlight the economic divide, different risk perceptions, social vulnerabilities, use of power, the emergence of controversies, and they also question our heritage.